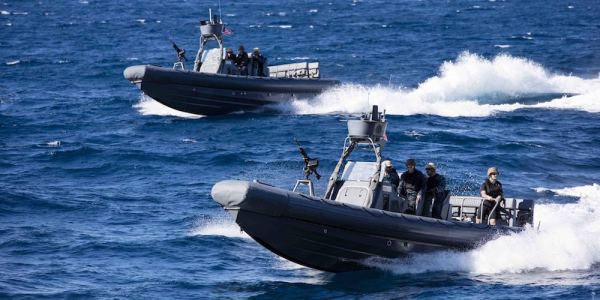 Move over, 355-ship Navy: the Marine Corps is working to build up its own sizable fleet of boats as it postures itself for future combat in shallow coastal waters and dispersed across large stretches of land and water.

Typically, small boats have been the territory of Marine Corps and Navy special operations and specialized forces such as the coastal riverines.

But, Coffman said, he has received guidance from Marine Corps Commandant Gen. Robert Neller to change that.

“If we were to claim any moniker, we want to be the father of the 1,000-boat Navy,” Coffman said at a Navy League event near Washington, D.C., in late November.

Related: The Marine Corps Is Eyeing A Badass Speedboat That Transforms Into A Spy Sub »

Currently, he said, Naval Expeditionary Warfare is resource sponsor to about 800 small boats, including combatant craft, Rigid-Hulled Inflatable Boats, and smaller craft. While the precise numbers desired haven't been settled on, he suggested 1,000 boats is close to what's needed.

“The Marine Corps largely got out of what we call itty bitty boats … the commandant wants us to get back in the boat business,” Coffman said. “He's recognizing he needs to distribute his force and be able to move in smaller discrete elements and different ways.”

The strategy for employing these boats is still being developed, but Coffman said the Marine Corps wants to be able to cover a wider range of maritime operations. The service, he said, likely wants to develop a family of small boats, ranging from high-tech combatant craft like those used in special operations to lower-end craft for harbor escorts and troop transport.

A good starting point for discussion, he said, is the 11-meter Rigid-Hulled Inflatable Boat, or RHIB, used by the Navy SEALs for a variety of missions and by Naval Expeditionary Warfare for things like maritime interdiction and transport to and from larger ships.

That design, Coffman said, would be easy to “sex up or simple down” as needed.

Related: The Marine Corps Wants A Truck-Mounted Rocket Launcher That Fits In An Osprey »

“A lot of my theme is trying to flip the script, move from defensive to offensive,” he said.

With the Navy's riverine forces increasingly employed in the Middle East to defend ships, there's less availability for other small boat missions that could press the advantage. But with an investment in a new family of watercraft, that could change.

“That's part of how you counter the peer threat: 'I'll out-asymmetric you,' ” Coffman said. “So [Neller is] excited about that, that work's going to happen.”