The Upgraded ‘Ma Deuce’ Is Making Its Way To The Marine Corps, Finally

There’s good news for Marines who are fans of the iconic M2 .50-caliber machine gun, aka “Ma Deuce.” The Corps... 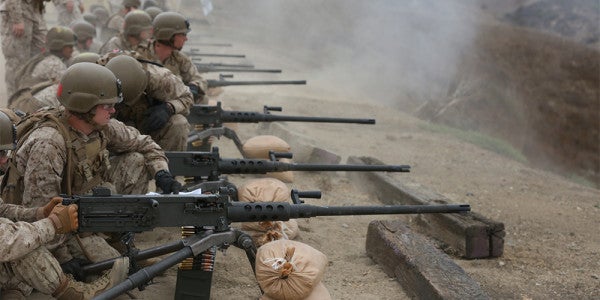 There’s good news for Marines who are fans of the iconic M2 .50-caliber machine gun, aka “Ma Deuce.” The Corps is getting an upgraded version of the beast, called the M2A1. Finally! It’s only been six years since the Army started getting the M2A1 back in 2011 — a fact that will surprise no one in the Marine Corps.

The updated M2A1 boasts “a quick-change barrel, fixed headspace and timing, and a flash hider that reduces the weapon’s signature by 95 percent at night,” according to the Department of Defense.

Headspace is the distance between a chambered cartridge’s base and the machine-gun bolt, and timing is — well, pretty much what it sounds like in a belt-fed burp-gun. Previous incarnations of the M2 required the operator to manually adjust headspace and timing to avoid jams.

Related: Army May Unveil A New And Improved Lightweight .50-Cal By Summer »

Fixed headspace and timing make a quick change of barrels possible, too, which is great, because loosening an ungodly hellstorm of .50 BMG upon your enemies tends to melt barrels with a quickness.

The third major change, the flash hider, will help conceal a Marine’s position — and it means he no longer has to worry about blinding himself or his NVG-wearing buddies every time he opens up with the “Ma Deuce” at night.

Marine infantry units have already been equipped with the M2A1 in the service’s first phase, which concluded last month. The second phase, which distributes the new machine guns to other units, is underway now. In total, 3,600 M2A1s will make their way into Marines’ hands by the end of fiscal year 2018… which is probably around when the Army will get its even better set of new .50-cal upgrades.