The Marine Corps had a busy, bellicose 2017, from returning to Afghanistan’s turbulent Helmand province to bombarding ISIS fighters in... 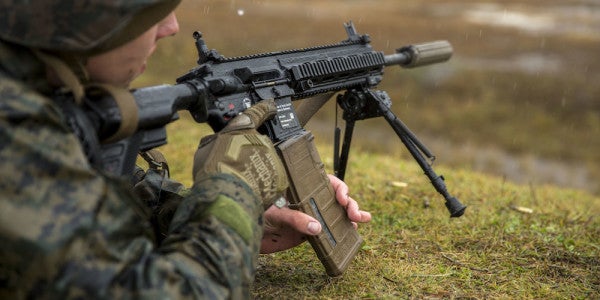 The Marine Corps had a busy, bellicose 2017, from returning to Afghanistan’s turbulent Helmand province to bombarding ISIS fighters in Syria with such ferocity that the Marines burned out two M777 Howitzers in the process. Now, almost a year after unveiling an ambitious plan to outfit an increasingly indispensable Corps, leaders plan on giving Marine the world’s most lethal makeover in 2018.

“Helmets, , lighter body armor, boots, utilities, everything on the infantry from head to toe is probably going to get changed,” Marine Commandant Gen. Robert Neller told an ebullient audience of U.S. troops deployed to Romania in December 2017. “I could kit out every grunt in the Marine Corps with the coolest shit head-to-toe for $100 million. And I intend to do that.”

Sure, it’s not exactly Oprah, but Neller’s announcement is still pretty damn exciting. So what, exactly, will be the things they carried in 2018? Here’s a brief guide to all the swag headed downrange:

Marines will soon get their hands on the M27 Infantry Automatic Rifle, based on the Heckler & Koch HK416, after putting in a request for a new infantry rifle that extends range without sacrificing accuracy or lethality last February. The branch issued a pre-solicitation for more than 50,000 M27s back in August 2017, and the price has dropped significantly in recent months.

While the Corps plans on widely fielding the new IAR outside the automatic rifleman MOS this year, it won’t be the only rifle floating around the barracks: DoD photos published in December 2017 showed troops with the 3rd Battalion, 8th Marine Regiment training with the M38 Squad Designated Marksman Rifle, an M27 variant designed to meet a team’s sharpshooting needs, at Camp Lejeune in North Carolina.

It’s not just the combat rifle that’s getting a boost: the Corps began equipping Marines with the M2A1, a significant upgrade to the classic .50-caliber machine gun currently used by the branch; the new model boasts a quick-change barrel and super-effective flash suppressor.

New pistols — for some

While soldiers are waiting patiently for their chance to holster the new XM17, selected as the Army’s Modular Handgun System, only a few Marine Corps personnel will get their hands on a new sidearm this year. In November 2017, the Corps announced that it had selected the Glock 19M pistol, designated the M007 (lol), for service members and civilians with the branch’s Criminal Investigation Division and HMX-1 — the experimental helo squadron that operates Marine One, the presidential chopper. Though fielding initially commenced around May 2017 after a year of expedited testing, the Corps’ 400 M007s likely won’t all end up in troop hands until this year.

The Corps is finally fielding its new and improved 83mm Shoulder-Launched Multipurpose Assault Weapon Mod 2 (SMAW Mod 2) rocket launcher to more Marine expeditionary forces, after gifting the new weapon to troops with the II MEF back in November 2017. Five years of research and development yielded new sights and laser ranging elements to the rocket launcher, but the long-awaited update may be for naught: As The War Zone notes, the SMAW Mod 2, despite being “more accurate and easier to use and maintain,” may end up replaced by the upgraded 84mm M3 Carl Gustaf recoilless rifles that the Army initially rolled out to soldiers in early September 2017.

Most powerful ammo, with a twist

In December 2017, the Corps confirmed to Marine Corps Times that it would adopt the Army’s new M855A1 5.56 mm round in 2018, praising the cartridge’s “improved steel penetration, hard- and soft-target terminal effects, with more consistent terminal effects.”

Developed by the Army’s Maneuver Center of Excellence at Fort Benning, Georgia, amid concerns that the branch’s existing 5.56 mm common rounds were unable to defeat enemy body armor, the common rifle round has been pushed on the Corps by some lawmakers, despite reported problems with the new M27 IAR.

After announcing plans to outfit an entire infantry battalion with suppressors in November 2016, the Corps outfitted the mufflers on every weapon in the Norway-deployed 1st Battalion, 2nd Marines’ arsenal — from the M4 service rifle to M2 .50-caliber machine guns. The Corps has been conducting live-fire exercises with suppressor-equipped M27 and M38, as well as pushing for built-in silencing tech; it’s likely that suppressors will see wider fielding in the coming months. (Marine Corps Systems Command did not immediately respond to request for comment.)

It’s not just suppressors Marines are playing with: According to Marine Corps Times, troops who deploy with the new IAR will likely do so with Leupold TS-30A2 Mark 4 2.5-8x36mm Mid-Range/Tactical Illuminated Reticle Scopes, which were spotted atop the M27 and M38 in photos from the 3rd Battalion’s December live-fire exercises. The Leupold would more than satisfy the demand for a 1-8X power scope laid out by the Corps in a September request for information for a “squad combat optic.”

Whether or not these accessories will broadly roll out across the Marine Corps remains to be seen: While the new suppressors and advanced optics will certainly accompany the Corps’ experimental “Uber Squad” for additional testing in Europe this spring, Military.com reported that officials were drafting requirements to equip every Marine infantry squad as soon as possible.

In July, the Corps awarded a five-year, $51 million contract to Gentex Corporation to outfit every single infantry Marine with the Enhanced Combat Helmet. The lightweight headgear, designed to increase ballistic protection against small arms, wad set for fielding to the I, II, and III Marine Expeditionary Forces in spring 2018, depending on the outcome of Corps’ year-long battery of tests.

The ECH will likely head downrange with an added bonus affixed to its forward bracket: brand new night-vision tech. Though the Corps is actively looking for a pair of goggles with both thermal imaging and standard night vision capabilities, Marine Corps Times reports that the service is currently fielding the helmet-mounted AN/PAS-29A night-vision system to infantry Marines. Unfortunately, the only troops picking up the new system are explosive ordnance disposal technicians; Marine Corps Systems Command told the Times that it “may field a similar device for the infantry, but will also ­consider a hand-held system.”

Sadly not. While the Corps has been testing the bejesus out of the Plate Carrier ­Generation III vest, those Limited User Evaluations were scheduled for the entirety of fiscal 2017, making it unlikely that the branch will end up fielding the new body armor system until at least 2019 as officials push to scrape every last pound off of infantry personal protection systems.

But the wait will be worth it for a system that Marine Corps Systems Command described as “less bulky, lighter in weight, and provides a smaller overall footprint than the current plate carrier while maintaining the same soft armor coverage and protection level” in an interview with Marine Corps Times. The service is also eyeing new plates to replace the standard-issues Enhanced Small Arms Protective Insert and the Enhanced Side Ballistic Inserts. (Marine Corps Systems Command could not immediately clarify the timeline for PCG II fielding to Task & Purpose.)

The new uniform and boots are all designed to shave as much weight off of a Marine’s overall load, to free him up for, uh, more kinetic ventures — and though they’re not seabag items (re: required), they’ll make an appealing temptation when they roll out later this year.

As part of the Corps’ effort to lighten the load for infantry Marines, the service is fielding its first reinforced Marine Corps Pack Frame update since 2011. Compared to the M27 and ECH, the new frame seems like a snooze, especially since the branch has been working on addressing breakages and cold weather durability issues since 2013. But the new frame “has proven to have significantly higher durability over the legacy frame,” as the Marine Corps stated in July. And more durability means less chance of dumping the rest of your gear when your rack freezes and shatters in the mountains of eastern Europe.

Speaking of the mountains of Europe…

After an embarrassing display of broken and failing gear during Marine Corps Rotational Force-Europe cold weather combat training in Norway this past May, the branch plans on investing $7 million over the next fiscal year to properly outfit troops for winter operations. This expenditure won’t just include those new pack frames or a pair of durable “ski march” boots, but 2,600 pairs of ASNES Combat NATO skis, set to start fielding to scout snipers and reconnaissance Marines starting at the close of 2018.

This is a big deal, given that American forces have spent the last two decades kicking ass on foreign battlefields like Afghanistan and Iraq —not the snowy ranges of eastern Europe, where the U.S. is refocusing its attention to counter Russian adventurism. Luckily for us, the Corps updated its guide to combat skiing when it released its new winter operations manual in May 2016. It’s the service’s first update to its combat skiing guide in 25 years, and boy, is it a fucking delight:

An illustration from the U.S. Marine Corps' Mountain Leader’s Guide to Winter Operations updated in 2016