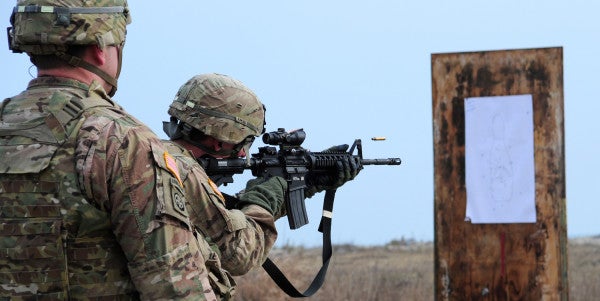 After repeated urgings from Congress to move to a common rifle round with the Army, Marine Corps officials told lawmakers Tuesday that they’re getting close to being able to do so.

The Marine Corps continues to use M855 ammo for their M16A4 and M4 5.56mm service rifles, instead of the M855A1 Enhanced Performance Round the Army uses for its rifles.

The problem, Marine officials have said, is that the newer round causes problems with the Marines’ M27 Infantry Automatic Rifle, with tests indicating use of the round with the IAR results in reliability and durability issues.

But the Marines recently took a step that indicates the service is becoming more comfortable with the Army round. Lt. Gen. Robert Walsh, commander of Marine Corps Combat Development Command, told members of the Senate Armed Services Committee that the Corps had sent the Army round to Helmand province, Afghanistan with a 300-Marine advisory element that deployed in April.

“The good news with that round … specifically the Army 855A1, is much better at penetrating armor,” Walsh said. “So that’s a good reason to go with that.”

Walsh said the Marines are also looking at the possibility of going with a U.S. Special Operations Command round, the MK 318, which offers better accuracy than the M855 round. The Marine Corps has used the SOCOM round in various capacities since officials scrapped plans to field the M855A1 round in late 2009.

Testing of the M55A1 round at the Aberdeen Proving Ground in Maryland was expanded to include the M27 and M16A4 rifles last March, Military.com reported in December. And that testing effort is now expected to wrap up next month, Brig. Gen. Joseph Shrader, commander of Marine Corps Systems Command, told the panel.

The testing examines performance, stopping power, effect on the durability of the weapons, and the impact of the flatter trajectory of the M855A1 round compared to the M855, which may require adjustments to Marine Corps range training and safety measures.

“Those four areas are what we’re looking at for testing to inform us to make a decision for how we go forward,” he said.

Maintaining separate caches of rifle ammunition for the Army and Marine Corps engenders waste and inefficiency, as lawmakers have repeatedly complained to the services. In the 2017 defense budget bill, Congress once again pushed for a common round, asking the secretary of defense to produce a report explaining why the different rounds were still being used.

But that may not be the case for much longer.

“We’re working through reliability things in testing, but we will make some adjustments from that, and I think in the end our Marines will have a much better capability when we’re done with it,” Walsh said.