Here’s a familiar scenario for most enlisted Marines: You’re walking along when you see an older Marine barreling toward you … Continued 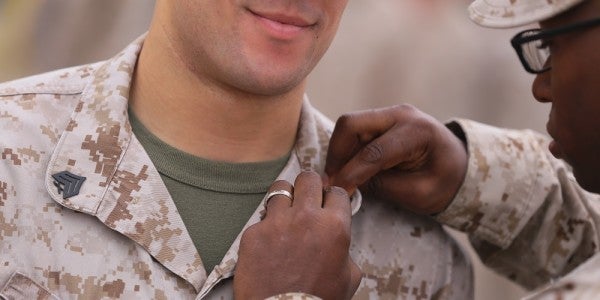 Here’s a familiar scenario for most enlisted Marines: You’re walking along when you see an older Marine barreling toward you with an immaculate eight-point and a shit-ton of black stripes and rockers on his collar. As you get ready to greet the fast-approaching staff NCO, you realize you can’t read his rank. The black chevrons have perfect concealment among the foliage of his woodland MARPAT uniform. He’s 15 feet away, then 10, then five. Oh shit, is he a first sergeant, no a gunny, no a master serg— Too late, so you spit out the first words that come to mind: “Good morning first sergeant.” Phew, nailed it.

Wrong. “Oh really devil dog? You don’t know a master sergeant when you see one?” Cue the predictable ass chewing.

It’s a common experience for most junior enlisted Marines. But it looks like someone higher up the chain has their backs. The Marine Corps is looking into replacing its standard metal rank insignia with cloth chevrons — a move calculated mostly to avoid rank confusion, according to Marine Corps Times.

Related: Everything You Know About The Marine Corps Uniform Is Wrong »

“That’s why the commandant is looking at cloth chevrons,” Sgt. Maj. of the Marine Corps Ronald Green told the Times on July 24. “A lot of young Marines say: ‘Hey, can we do something to make the rank insignia more visible?’ So we’re taking a look at that.”

The Marine Corps is evaluating a set “embroidered subdued rank insignia” and comparing them to the current metal rank based on visibility, durability, and compatibility, according to a Marine Corps Systems Command statement. The proposed cloth rank is being tested in different locations on the uniform, from the collar, to the upper sleeve pocket flap, and whether the chevrons will be pinned, sewn, Velcroed or affixed with a hook and loop.

Given how much it sucks to get chewed out for no reason other than not having perfect 20/20 vision, I get the idea of making rank a bit more visible, but cloth chevrons are sure to rub some devil dogs the wrong way. The Army and the Air Force use cloth rank. If there’s one thing Marines take pride in, it’s being as distinct from the other services as possible, even when the other services decide to copy the Corps’ style.

UPDATE: 7/25/17; 3:17 pm: This article has been updated with a statement from Marine Corps Systems Command.