Uncle Sam's Misguided Children are getting a new, reinforced pack frame, eventually, theoretically, perhaps! Which is good, because as 2nd Marine... 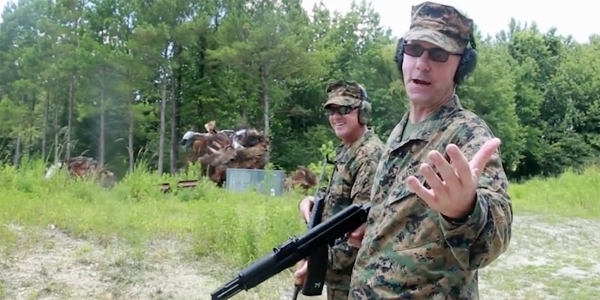 Uncle Sam's Misguided Children are getting a new, reinforced pack frame, eventually, theoretically, perhaps! Which is good, because as 2nd Marine Division’s small-arms yogi, Chief Warrant Officer Christian P. Wade, quickly demonstrates in his newest Gunner Fact or Fiction video, you could bend the crap out of the old standard-issue pack frame with the lightest of efforts. (They also don't handle the cold very well, it turns out.) But how's the new gear hold up to Wade's punishment? Reader, I am so glad you asked.

Wade — who in previous video installments has demonstrated how to cook bacon on your rifle suppressor and load your 5.56 mags with ridiculous speed — now endeavors to show us whether the new Corps pack frame can stand up to the punishment that he and Sgt. Major Bryan Zickefoose dole out to it:

What punishment, you ask? Nothing crazy, just dragging it at high speed behind a Jeep Rubicon; running it over with said Rubicon; and dropping it in a loaded pack from a cherry-picker… repeatedly.

That's when the Marines grab their AKs.

Even after eating a couple dozen rounds of 7.62, “The… pack… won,” Wade grudgingly admits. “You can still wear this thing, after all that. It’s still usable.”

So, what? You're going to stop trying to wreck that thing now? Hell, no. “Gunner, you know what they say,” Zickefoose jokes. “Nothing is Marine-proof.” Let's just say that the pack loses eventually, but believe me, you're gonna wanna watch how.