The Marines Are Experimenting With A New Infantry Rifle 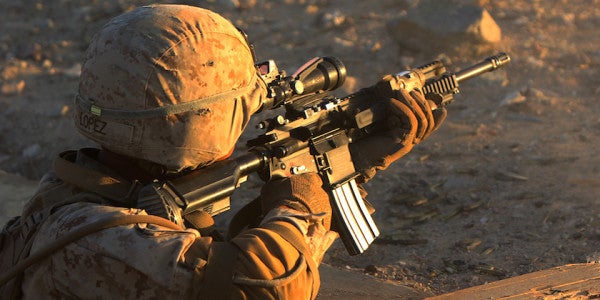 On the heels of a widely praised 2015 decision to issue the more maneuverable M4 carbine in lieu of the M16A4 to Marines in infantry battalions, the Marine Corps may be on the cusp of another major weapons decision.

The battalion is set to deploy aboard the 31st Marine Expeditionary Unit this spring. As part of its workup and deployment, it has been charged with testing and evaluating a host of technologies and concepts ranging from teaming operations with unmanned systems and robotics to experiments with differently sized squads.

“When they take the IAR and they're training out there with all the ranges we do with the M4, they're going to look at the tactics of it. They'll look at the firepower, and they'll do every bit of training, and then they'll deploy with that weapon, and we'll take the feedback to the Marine Corps to judge,” O'Donohue said.

Marines in 3/5 used the IAR as their service rifle during the 28-day Integrated Training Exercise held this month at Marine Corps Air-Ground Combat Center 29 Palms, California. The exercise, also known as ITX, is the largest pre-deployment workup for deploying battalions, and typically one of the last exercises they'll complete. O'Donohue said the ubiquity of ITX would give evaluators ample data as they contrasted results with the different weapons.

“All you have to do is compare this battalion to the other battalions going through ITX,” he said.

The M4 carbine and the M27 IAR handle very similarly as they share a number of features. However, the M27 has a slightly longer effective range — 550 meters compared to the M4's 500 — and elements that allow for more accurate targeting. It has a free-floating barrel, which keeps the barrel out of contact with the stock and minimizes the effect of vibration on bullet trajectory. It also has a proprietary gas piston system that makes the weapon more reliable and reduces wear and tear.

Related: Why The Military Is Moving On From The M16 »

And the the IAR can fire in fully automatic mode, while the standard M4 has single shot, semi-automatic and three-round burst options.

Currently, each Marine Corps infantry fire team is equipped with a single IAR, carried by the team's automatic rifleman.

“I think the fundamental is the accuracy of the weapon, the idea that you're going to use it for suppressive fires. And at first contact you have the overwhelming superiority of fire from which all the tactics evolve,” O'Donohue said. “So it starts with the fire team and the squad, if you give them a better weapon with better fire superiority, you'll just put that vicious harmony of violence on the enemy.”

But officials do see some potential drawbacks to equipping every infantry Marine with the weapon.

“One of the things we're looking at is the rate of fire,” O'Donohue said. “You can burn off too much ammo, potentially, with the IAR. We have a selector, a regulator how many rounds the Marines shoot. So that's one area we're examining with experimentation.”

Another variable is cost.

Chief Warrant Officer 5 Christian Wade, the gunner, or infantry weapons officer, for 2nd Marine Division, told Military.com the M27 costs about $3,000 apiece, without the sight. Because the Marine Corps is still grappling with budget cutbacks, he said he was skeptical that the service could find enough in the budget to equip all battalions with the weapons. He said a smaller rollout might be more feasible.

“To give everyone in a Marine rifle squad , that might be worth it,” he said.

O'Donohue said feedback would be collected on an ongoing basis from the Marines in 3/5 as they continued workup exercises and deployed next year. Decisions on whether to field a new service weapon or reorganize the rifle squad would be made by the commandant, Gen. Robert Neller, when he felt he had collected enough information, O'Donohue said.

If the Marine Corps can sort out the logistics of fielding, Wade said he would welcome the change.