Marksmanship, the ability to shoot accurately and service targets with the minimum expenditure of ammunition, has always been part of … Continued 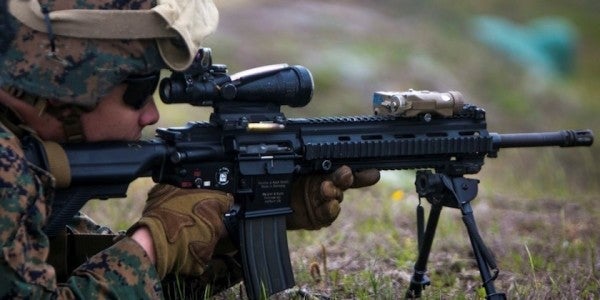 Marksmanship, the ability to shoot accurately and service targets with the minimum expenditure of ammunition, has always been part of the Marine Corps ethos. The adoption of the M27 Infantry Automatic Rifle over the older M249 Squad Automatic Weapon marks a return to that ethos across the service at the small unit level. More accurate and capable of accomplishing its mission with fewer expended rounds, the M27 is now being considered as the front-line rifle not only for a handful of squad members but across the Corps’ front line units.

The Marine Corps, accustomed to heavy losses against strong enemy defenses and beach assaults, maintains robust, thirteen-man infantry squads. These squads further divide into three fire teams led by a single squad leader, each of which has two riflemen, a grenadier, and an automatic rifleman. Compared to a nine-man U.S. Army infantry squad, the Marine squad has four more personnel and a third rifle team. The result is increased flexibility and more tactical options for the squad leader.

For decades the fire team automatic rifleman has been equipped with the M249 Squad Automatic Weapon. Originally developed by Fabrique Nationale as the MINIMI, the M249 was capable of laying down a large volume of fire, up to 900 rounds per minute, using 200 round belt-fed packs of ammunition. This made the M249 useful for suppressive fire, keeping the enemy’s head down while other fire teams closed with the enemy. The M249 was a Marine Corps staple through the 9/11 era.

As useful as the M249 was, it did have problems. A 2006 report conducted by the CNA Corporation found that among U.S. Army combat veterans, the M249 scored below average in third place (after the M16 rifle and M4 carbine, but generally ahead of the M9 pistol) in handling, accuracy, maintainability and corrosion resistance. Nearly 30 percent of troops issued the M249 reported experiencing a stoppage in contact with the enemy, and 35 percent expressed a lack of confidence in weapon reliability. Although a U.S. Army study, the weapons involved in the study were identical to those issued at the time by the U.S. Marines.

The most glaring problem with the M249: it was never a good institutional fit for the Marine Corps. Although the weapon could hose down an enemy position with fire it wasn’t particularly useful for accurately engaging individual targets. The increase in ammo consumption meant an increase in carried ammunition weight. Ammunition consumption went up, the weight of carried ammunition went up, and accuracy went down—not an ideal situation for infantry.

In 2010, the Marines introduced the M27 Infantry Automatic Rifle (IAR). The IAR is based on the Heckler and Koch 416 rifle, which outwardly is very similar to the M4 carbine. Unlike the M4 carbine, the M27 uses the gas piston operating system, which uses a piston to drive the bolt. Instead of recycling hot, dirty propellent gases to cycle the weapon the M27 vents them, resulting in a cooler running, cleaner running, if slightly front-heavy rifle.

The M27 differs in other ways. The rifle barrel is slightly longer and heavier than the M4 carbine, giving the M27 a slight range advantage over the carbine. The thicker M27 barrel can fire longer than the M4 before overheating, but will also disperse heat longer. The M27 is also much lighter, weighing nearly ten pounds fully loaded, versus twenty-two pounds fully loaded for the M249 Squad Automatic Weapon. This is an appreciable difference during long periods of carrying the weapon.

The main difference between the M27 and M249 Squad Automatic Weapon, however, is accuracy. The M249 is first and foremost a machine gun and is accurate to about twelve minutes of angle, meaning rounds will hit within a foot of their target at 100 yards. The M27, on the other hand, is approximately a two minute of angle weapon, meaning it will land rounds within two inches of the target at 100 yards. In the hands of a trained automatic rifleman, this scales upward, so the M27 will deliver rounds within twelve inches of the target at 600 yards.

Other factors further improve the M27’s accuracy. The weapon features a Harris folding bipod, giving it a stable shooting position while prone or from behind cover. It also features a Trijicon ACOG Squad Day Optic, which sports 3.5 power magnification and allows target identification and precision fire out to distances of up to 600 yards. The ACOG also incorporates a rugged miniaturized reflex (RMR) sight for close quarters shooting at 100 yards or less.

The M27 is described by marines in the field as “two weapons in one”: a rifle capable of precision fire to eliminate individual targets but also capable of providing area suppression fire, like a SAW, if necessary. The difference is that the improved accuracy of the M27 leads to the need to fire fewer rounds to suppress a target, and less ammunition consumption in general. By contrast, the M249 it replaces is primarily an area suppression fire weapon with no precision fire capability.

The M27 has become so well-liked in August 2017 the Marine Corps issued an intent notice to procure another 50,000 rifles—enough to equip every infantryman and automatic rifleman in front-line combat units. Such an upgrade would give the Marine Corps an impressive boost in aimed firepower and mark a return to the Corps’ tradition of marksmanship.