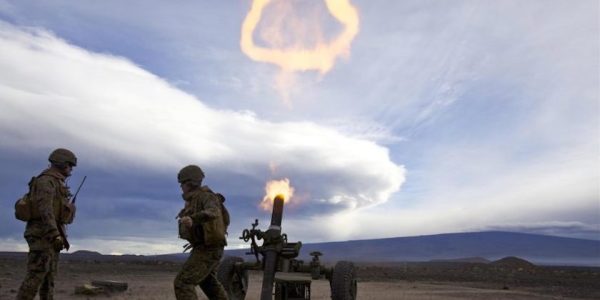 The Marine Corps is on the hunt for an uber-compact rocket launcher system capable of raining down suppressive fire on the enemy, then flying away in a V-22 Osprey or CH-53K King Stallion.

As the Corps prepares for a future fight in which units operate with greater independence and at greater distances apart, portability and power are at a premium.

At the National Defense Industrial Association’s Expeditionary Warfare Conference, Marine Maj. Gen. David Coffman, director of expeditionary warfare for the Navy, said the service was after a system that could deliver both precision and suppressive effects.

“If we can get a self-contained vehicle that can fire rockets, a box of rockets on a truck that fits in the back of a tiltrotor or a ’53-K, that’s what we’re after,” he said.

Related: Marines Can Now Bombard Enemies With Guided Artillery Rockets From The Sea »

Speaking to Military.com, Coffman expanded on his vision for such a system, saying he had in mind something potentially smaller than a Humvee.

“I don’t know what’s in the art of the possible, physics-wise, to get a vehicle that can withstand the recoil of rockets firing, and be a stable enough platform, and still be light enough to be lifted in a helicopter, and all that,” he said. “So I don’t know what industry can do, whether that’s possible or not … that’s what we need.”

The Marine Corps currently deploys the Expeditionary Fire Support System, a 120mm mortar system designed to fit in a trailer pulled by a small all-terrain vehicle that fits inside an Osprey.

Next year, the system is due to receive a precision GPS-guided round that will extend its range from 8 kilometers to 16, or roughly 10 miles.

But Coffman said precision rounds are also being developed for the man-portable 81mm mortar system, minimizing the advantage of the EFSS.

Ideally, Coffman said, the system he has in mind will have a range competitive with the M142 High Mobility Artillery Rocket System, or HIMARS, which is mounted on a 5-ton truck and has a range of 70 kilometers, or about 43 miles.

So far, all these requirements represent a wish list, but Coffman said he has had some promising conversations with industry professionals

“Let’s see what industry comes up with,” he said.

The Marine Corps, at the behest of Commandant Gen. Robert Neller, is working elsewhere to beef up its artillery capabilities and get more out of its existing systems.

In a first for the service, Marines on Monday fired a HIMARS rocket from the back of the amphibious transport dock USS Anchorage, proving the service’s ability to take out a land-based target from the sea at maximum effective range.