These Marines Will Be The First To Get M320 Grenade Launchers

The Marine Corps recently dropped a bombshell — or more accurately, a ton of 40 mike-mike — when it announced... 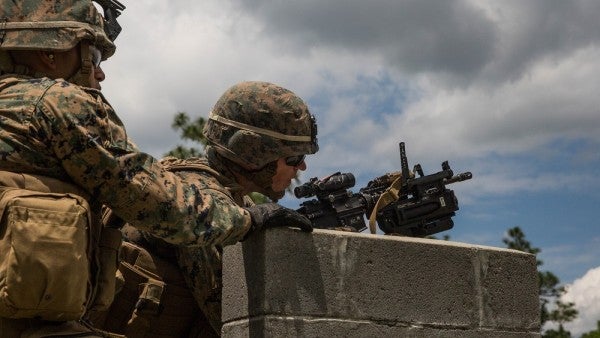 The Marine Corps recently dropped a bombshell — or more accurately, a ton of 40 mike-mike — when it announced June 9 that the service had finally received the M320 grenade launcher, just eight years after the Army took possession of the new weapon. The Corps is slated to receive approximately 7,000 M320s and will issue the new bloop gun to infantry Marines first. From there it’ll make its way to other ground combat units, according to the Corps.

“In keeping with Commandant of the Marine Corps’ priority, the infantry will be the first to receive the M320, then expanding out to combat engineer squads, reconnaissance teams, Light Armored Reconnaissance companies, Marine Special Operations Teams, and MOS training locations,” Barb Hamby, a Marine Corps spokesperson, told Task & Purpose in an email.

Currently, Marines with 2nd Combat Engineer Battalion and 2nd Marine Division based out of Camp Lejeune, North Carolina, are experimenting with the M320 as part of Sea Dragon 2025, an 18-month initiative in which Marines field-test new weapon systems and tactics. The Corps is even outfitting a single “uber squad” of grunts from 1st Battalion, 6th Marines with everything from M27s to polymer mags and suppressors, according to Military.com.

Engineers with 2nd CEB hit the range at Camp Lejeune on June 6 to test out the M320 as part of the Corps’ small-arms modernization strategy, which experiments with different weapon systems to test their lethality, Hamby said.

Unlike the M203, which is permanently affixed under the barrel of a rifle, the M320 can be fired as a standalone weapon. Additionally, the M320 loads from the side, allowing for longer projectiles with greater velocity, compared to the breech loading M203. Among the list of perks the M320 boasts: Its sight is a bit less cumbersome than the M203’s leaf sight, which can get in the way of a weapon’s optics.

“The M320 has an increased rate of fire, and also allows the operator to acquire their targets much faster; used as either a standalone weapon or on a host weapon, it’s an accurate and efficient system,” Cpl. Nelson Gay, a squad leader with 2nd CEB said in a recent Marine Corps statement.

The news that the Corps will begin fielding the M320 is sure to be well received, but let’s not get too excited about it being a “new” grenade launcher; after all, both the Army and Battlefield 4 had it first.