Meet DOGO: The Cute Little Robot Out For Terrorist Blood

Remote controlled drones have been used in combat since the earliest days of the so-called War on Terror, keeping insurgent... 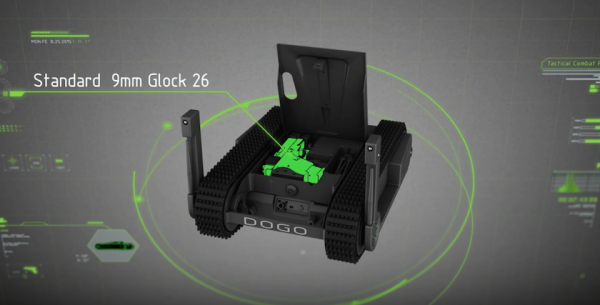 Remote controlled drones have been used in combat since the earliest days of the so-called War on Terror, keeping insurgent groups across the globe perpetually fearful of death raining down from above. But what about from below? Now, thanks to an Israeli tech firm, that’s an option, too.

Designed by General Robotics Ltd., DOGO is the earthbound equivalent of the ubiquitous combat drone. And this pint-sized trooper — described by Defense News as the “world’s first inherently armed tactical combat robot” — could revolutionize the way commando units and SWAT teams conduct counterterrorism operations around the world, which is precisely what it was created to do.

DOGO weighs roughly 26 pounds and can be carried in one hand by a fully armed commando. While it’s named after the Dogo Argentino, a breed of big game-hunting mastiffs, DOGO more closely resembles, say, a rat terrier or a chihuahua, except this particular breed comes armed with a Glock 26 9mm pistol that fires 14 rounds in a single burst.

According to Defense News, DOGO was designed with input from the Israeli police’s counterterror unit and the Defense Ministry’s research and development directorate to combat terrorism.

“No robot out there on the market is organically designed to engage the target,” Shahar Gal, General Robotics’ vice president for business development, told Defense News.

DOGO is controlled via a so-called Ranger remote control unit that allows the user to remain at a safe distance from the target he intends to shoot. The robot is equipped with eight micro-video cameras that offer a 360-degree view of the objective, as well as two boresight cameras for firing the pistol.

Related: Mind-controlled drones are now real, and they could transform the battlefield »

As seen in the video, DOGO, which is battery-powered and runs for about four hours on a single charge, can function like a robotic scout, or assassin. It intuitively climbs stairs, clears obstacles, and creeps up on its target as quietly as a church mouse. But it’s not cheese DOGO is after. It’s blood.

The fact that DOGO doesn’t look like the Terminator might be what makes it so lethal. If a shotgun-toting Schwarzenegger walks through the door, you’re jumping out the window. But this little guy? You might be more inclined to risk it — that is, if you even realize he’s in the room. And then you’ll get shot. Or blinded, if the operator chooses to fire pepper spray, which is also an option.

According to Defense News, General Robotics will formally unveil DOGO at the Eurosatory Exhibition in Paris next month, and is on course to begin production soon.