Mikoyan-Gurevich fighter jets, pressed into service by the Soviet Union during the early years of the Cold War, have been... 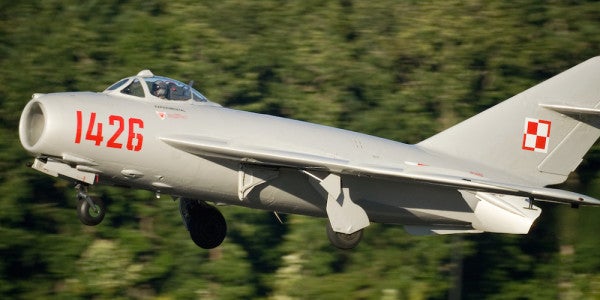 Mikoyan-Gurevich fighter jets, pressed into service by the Soviet Union during the early years of the Cold War, have been the backbone or Russian, North Vietnamese, and North Korean air forces for decades. MiGs are synonymous with the sneering, faceless commie baddies who stood in as America’s fictional film foes, from Top Gun to Air Force One — and now you can finally have one parked in your backyard.

Florida-based firm Raptor Aviation is currently offering up a MiG-17PF for, well, whatever you want to throw at them. The Polish-made Lim-5 (a licensed version of the classic Soviet MiG-17), manufactured in 1960, has been “seen regularly on the air show circuit” over the last 23 years, according to Raptor. But the aircraft has undergone a “thorough” restoration, with a Klimov VK-1K engine, relatively pristine original interior and exterior, and classic Polish Air Force markings (The company's also offering up a handful of MiG-21UM fighters, the Soviet-made response to the F-4 Phantom II available in with both Soviet and Polish markings).

Guns.com notes that, of the 10,000 MiGs produced, almost 500 Lim-5s were manufactured for the Polish Air Force by PZL WSK-Mielec at the height of the Cold War, and the company calls it “ of the cleanest MiG 17s you’ll find.” Unfortunately, the aircraft doesn't come with any munitions or weapons systems, but you might as well throw down a few bucks and get this mean machine dirty again.