After months of waiting, the Army’s brand new pistols are finally where they belong: in the hands of American soldiers. … Continued 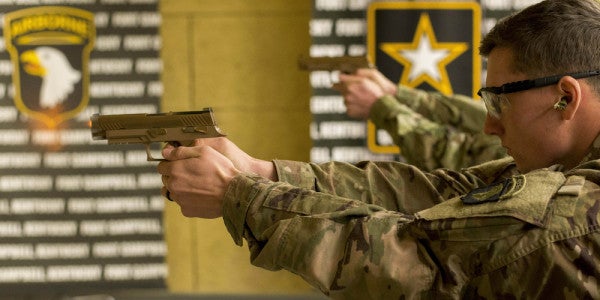 After months of waiting, the Army’s brand new pistols are finally where they belong: in the hands of American soldiers.

On Nov. 28, the 101st Airborne Division at Fort Campbell, Kentucky, began fielding the M17 and M18 pistols picked up as the Army’s new Modular Handgun System at the beginning of 2017. And for the first time, the new handgun is being issued to team leaders first, according to Military.com, a policy that will extend to all Army units who will receive the new sidearm over the next 10 months.

“This weapon is going to go down to the team leader, which is not what we typically have in the 101st or across most light divisions,” 10st master gunner Sgt. 1st Class Andrew Flynn told Military.com. “We are putting this weapon into the hands of a lot of younger soldiers who have never fired it.”

The Screaming Eagles are the first unit to get a hold new pistol during the branch’s equipping timeline — and so far, 25 soldiers with the 101st’s 1st Brigade Combat Team who had first crack at the new sidearm all shared the same reaction — at least, according to the Army.

The Army's new Modular Handgun System, fresh out of the box at Fort Campbell, Kentucky, on November 28, 2017Photo via DoD

“It handled really well, very reliable,” C Company team leader Cpl. Jory Herrmann told Military.com. “We slung a lot of rounds down range today had little to no problems out of them.”

“The pistol felt very natural in my hand.” Col. Derek K. Thomson, the 1st Brigade Combat Team commander who oversaw the initial fielding, said in a statement. “The [101st] has always been at the cutting edge of battle, so it's fitting they are the first to fire alongside these leaders today.”

“The weapon itself is a very simple handgun; it's a very easy handgun to shoot,” 1st Lt. Andrew Borer told Military.com, describing the first day of fielding as “a pretty awesome day.”

“There is little to no resistance on the trigger,” he added. “It's a very easy weapon to regain our sight picture with and to aim and fire the weapon once we have put a round down range.”

Sgt. Matthew J. Marsh put it simpler in a statement: “It is easier to fire and simpler to operate.”

We can’t blame the 101st for being so damn excited over shiny new pistols. It’s been a long time coming, with seemingly endless drama from the start of the Modular Handgun System competition that continued even after the contract was awarded in January to Sig Sauer.

Shortly after the Army announced the award, Sig’s primary MHS rival Glock Inc. lodged a protest with the U.S. Government Accountability Office, alleging that truncated testing favored the P320 over the company’s 9mm Glock 19 and .40 caliber Glock 23. While the complaint was thrown out in May, another manufacturer, Steyr Arms, immediately launched legal proceedings against Sig over alleged patent infringement.

Reports of safety defects among the P320s sold to civilian law enforcement agencies may not sink the initial fielding in the relative order of Fort Campbell, but we’ll see how well the new pistols hold up when put to the real test: in a firefight.