Everyone Needs A Mossberg Shotgun In a Tube, Just In Case

No matter how prepared you are, disaster can strike at any moment. While most authorities recommend keeping the essentials on... 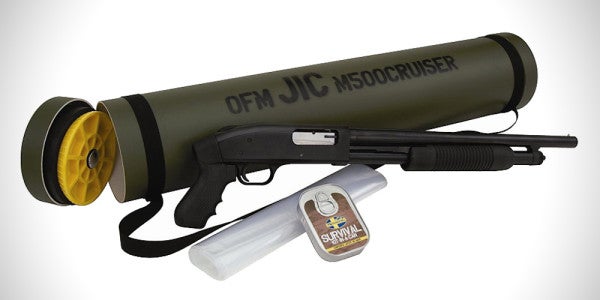 No matter how prepared you are, disaster can strike at any moment. While most authorities recommend keeping the essentials on hand in the event of a crisis — flashlights, canned food, water, batteries, and the like — sometimes it’s worth having something a bit stronger on hand to deal with things like, say, home invaders or the sudden breakdown of society. That’s why we recommend the Mossberg “Just-in-Case” Shotgun Kit.

Yeah, it’s just a tube with a shotgun in it, but that’s no ordinary shotgun: It’s a Mossberg 500 12 gauge pump-action, the most reliable combat shotgun on the planet. There’s a reason the company’s pump-action M500A2 has been the breaching weapon of choice for both local law enforcement and the U.S. armed forces, as detailed in a fascinating Guns & Ammo feature from 2007 following the Mossberg downrange with a Marine Amphibian Tractor Battalion in Iraq:

Over the next 24 hours, eight Marines with three Mossbergs controlled the perimeter against at least 300 determined looters. Each Mossberg digested between 200 and 300 assorted rounds of beanbag and fin-stabilized LTL shotgun rounds. Accuracy was superb with both types of projectiles, with 20-yard beanbag hits and 30-yard fin-stabilized hits made with regularity. There was not a single malfunction between the three.

I later found out that one Mossberg had been riding around dust-encrusted in a Hummer for three days, and it didn't matter. The 590 just kept going.

As if a Mossberg itself wasn’t enough, the company’s shotgun kit comes with a few additional goodies as well: matches, duct tape, fishing hook and line, razor blade, signal mirror, fire starter cube, and more, sealed up in a water and impact-resistant survival kit. The kit itself will run you somewhere between $399 and $499 (and $519?) depending on where you order it from, but it’s worth it for the safety and security of an extra Mossberg floating around — you know, just in case.