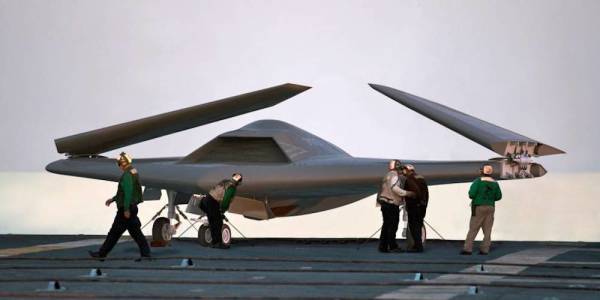 Citing multiple sources within the Navy, the Naval Institute reports that the two carriers will get upgrades to control the drone, and Chief of Naval Operations Adm. John Richardson wants the Stingray on carrier decks by 2019.

Not only would the Stingray extend the range of carrier-based aircraft, it would lessen the burden on the heavily taxed F/A-18 Super Hornets, which currently fly refueling missions for the Navy.

Though the report shows the Navy's top leadership obviously is behind the Stingray in concept and in principal, it hasn't even been built yet.

The drone often pictured alongside articles about the Stingray isn't actually the MQ-25A Stingray, but another carrier-based drone, the X-47B.

X-47B Unmanned Combat Air System Demonstrator (UCAS-D, a previous name for the MQ-25A) launches from an aircraft carrierPhoto via DoD

A Navy spokesperson told Business Insider it was too early to comment on when or where the Stingray would eventually test and deploy. The Navy hasn't even put out a request for proposal on building the Stingray yet.

Rising anti-access/area-denial threats from Russia and China could possibly explain the Navy's rush for an as-of-yet non-existent platform. Additionally, North Korea has made strides toward fielding anti-ship weapons that could threaten the Navy near its shores.