It usually takes the Navy around five months to build even the smallest submarines to ferry Navy SEALs into and... 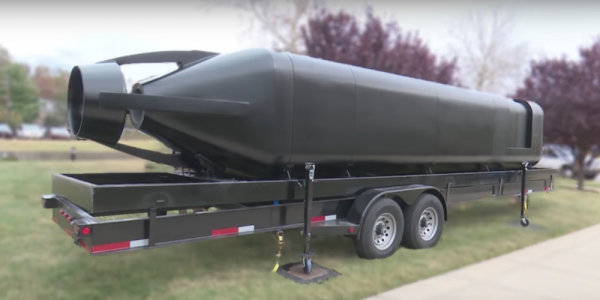 It usually takes the Navy around five months to build even the smallest submarines to ferry Navy SEALs into and out of combat zones — but thanks to new technology, the Navy's most elite warfighters could slap together a submersible hull in just a few weeks.

That’s the promise behind the Optionally Manned Technology Demonstrator (OMTD), the U.S. military’s first 3D-printed submarine hull, unveiled by the Navy on July 24. Fabricated by the high-tech Big Area Additive Manufacturing 3D printing machine at the Oak Ridge National Laboratory, the 30-foot submersible hull was inspired by the SEAL Delivery Vehicles used by the branch and U.S. Special Operations Command to deploy Navy special warriors and their gear into particularly dangerous areas.

But while a traditional SEAL submarines cost up to $800,000 apiece and take three to five months to manufacture, six carbon-fiber composite sections of the OTMD took less than a month and only $60,000 to assemble, according to the Department of Energy — a shift that the Navy claims could massively reduce production costs.

The Department of Defense and global defense industry have put a premium on 3D printing (or “additive manufacturing,” if you want to be technical) for years, ranging from Army Armament Research, Development and Engineering Center’s fabricated “RAMBO” grenade launcher to portable printing units designed to help Marines repair essential gear faster downrange.

But the OTMD, apparently now the Navy’s largest 3D printed asset, represents a massive leap forward in terms of “on-demand” manufacturing. Rather than slap together expensive and time-consuming materiel requests during the long federal budgeting process, military personnel could simply fabricate vehicles and supplies on demand to adapt to changing operations. With U.S. special operations forces leading the charge in the Global War on Terror, assets like the OTMD could greatly increase their operational flexibility — and effectiveness.

According to the Navy, fleet-ready prototypes of the OTMD could hit the water as soon as 2019 — which, depending on who you ask, probably isn’t soon enough.