This high-tech helmet looks like something torn from the inside of Tony Stark’s Iron Man armor, or maybe the gunner … Continued 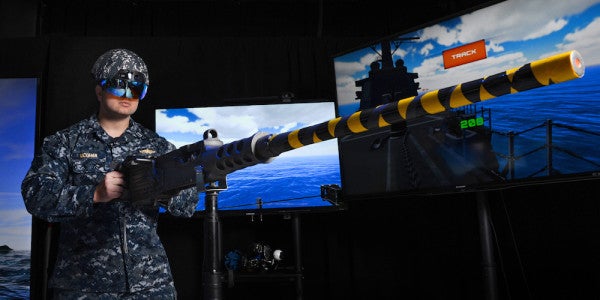 This high-tech helmet looks like something torn from the inside of Tony Stark’s Iron Man armor, or maybe the gunner bay of the Millennium Falcon, but don’t be fooled: The U.S. Navy’s latest gadget could revolutionize the way American warships engage the enemy — and it’s coming to bridges sooner than you may think.

The Navy has been experimenting with increasingly more complex heads-up displays for years, but the GunnAR represents a leap forward for Naval command-and-control architecture, feeding information directly from a vessel’s gunnery liaison officer and weapon system into a digestible, easy-to-analyze visual medium for a naval gunner engaging the enemy.

“The gunner’s mate has a problem when the shipboard environment is noisy or busy. There is a lot of confusion and a lot of noise when they are firing on targets,” Battlespace Exploitation of Mixed Reality Lab director Heidi Buck told C4ISR.net in January. “The gunner’s mate hears the firing commands from someone, who is hearing them from the radio, and those commands are coming from the bridge. So it’s like playing telephone with guns firing and wind blowing.”

The concept, which first received in $100,000 in prototyping funds in March 2016 and will be tested aboard the USS Bunker Hill and USS Theodore Roosevelt during Trident Warrior, was dreamed up by Lt. Robert McClenning to solve exactly the problem Buck described. From Defense Systems:

McClenning, a training officer aboard the guided-missile destroyer (DDG 101) USS Gridley, said the way the information sharing and authorization to fire is currently done–via decades-old radios and sound-powered phones–is hard to hear the chatter over the din of machine guns and through the required ear protection.

His concept, GunnAR, is an AR overlay placed onto helmets manufactured by industry partner, DAQRI, an AR technology company based in Los Angeles, California. SSC Pacific and DAQRI have entered a collaborative research and development agreement to further explore and develop this technology, Navy officials said.

The Space and Naval Warfare Systems Center Pacific first unveiled the GunnAR for Office of Naval Research officials and weapons industry representatives last December, and scientists recently showed off the GunnAR system at the 2017 WEST exposition in San Diego in February. But with testing by battle-hardened sailors and Marines under real-world circumstances during Trident Warrior in June, Buck guaranteed that the Navy would observe a “more mature capability” soon enough.