The Navy’s Electromagnetic Railgun Is Both Alive And Dead

The Navy will continue to fund research and development efforts related to the service’s much-hyped electromagnetic railgun but will likely... 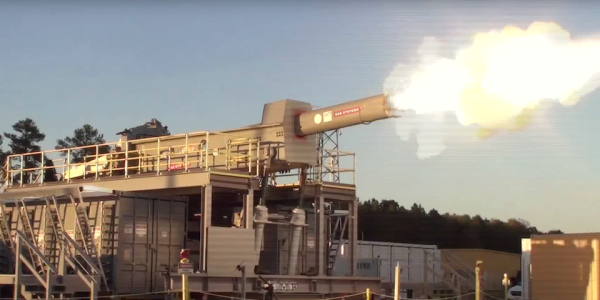 The Navy will continue to fund research and development efforts related to the service’s much-hyped electromagnetic railgun but will likely not pursue a shipboard tactical demonstrator, according to sources briefed on the matter, a development that will likely condemn  the more than $500 million project to a R&D; limbo as the Department of Defense focuses on other directed energy programs.

A special “Innovative Naval Prototypes” line item in the Navy’s fiscal 2019 budget proposal, published on Feb. 12, explicitly sets aside a hefty $45.8 million to “applied research addressing the unique technical challenges inherent in the construction, assembly and operation” of the railgun prototypes currently enjoying testing by engineers at the Office of Naval Research and Naval Sea Systems Command.

This specific line item is just one of several that shape funding for the Pentagon’s portfolio of directed energy projects, like solid-state lasers and the hypervelocity projectile, both of which have emerged as higherpriorities than the railgun for the DoD in recent years. But as The War Zone notes, the explicit budget line indicates that the Navy hasn’t completely given up on idea of developing a supergun capable of liquefying enemy armor from miles away — even if the service did request $10 million less than in fiscal 2018.

But the new round of funding doesn’t spell an end for the railgun development woes. According to congressional sources, Navy officials stated during a Feb. 15 briefing on the Navy’s RDT&E; budget that while the service planned to continue funding railgun R&D; efforts, its previous decision to not pursue a shipboard tactical demonstrator remains in place, and the service has made no commitment to fielding one until the existing subsystems were fully proven.

Those sources, who spoke to Task & Purpose under the condition of anonymity because they were not authorized to comment on internal budget discussions, came away with the understanding that while the railgun hasn’t been abandoned outright, it’s lower on the Pentagon’s priority list of next-gen weapons than in previous years.

While the Navy’s directed energy funding lines aren’t the most compelling tea leaves to read, this alleged unwillingness to commit to a demonstrator is reflected in the consolidation of electromagnetic railgun funding across other line items in the Navy’s fiscal 2019 budget request. The service’s Navy Warfighting Experiments And Demonstrations line, which would have funded prototyping “from a subscale proof-of-principle into a full-scale prototype for warfighter experimentation during laboratory and operational demonstrations,” fell from $64 million in fiscal 2018 to zilch, folded into a Navy Advanced Technology Development (ATD) line item (0603671N) — which lacks mention of a demonstrator.

In addition, the Innovative Naval Prototypes line item (0603801N) — the same one where lawmakers consented to tack on an additional $15 million explicitly for a tactical demonstrator during budget negotiations in December 201 — also picked up an additional $53.57 million in this year’s budget proposal. But it’s worth pointing out those funds are committed to directed energy weapons broadly: Indeed, the only explicit mention of a railgun demonstrator is couched in a vague promise “to test and build full-scale electromagnetic railgun system prototypes that include the battery charging system, the pulsed power subsystem, and the electromagnetic launcher” — with no specific dollar value attached.

The Pentagon’s apathy towards a full-scale railgun demonstrator is bad news for those excited about the prospect of eventually watching the supergun wreak havoc downrange. As Task & Purpose previously reported, congressional and defense sources see the development of working shipboard as a crucial step to preventing the railgun from landing in a “valley of death” between RDT&E; and procurement that prevent long-term engineering sources from ever advancing beyond applied research and development stage. “Funding” may be a necessary condition for the railgun to secure a future among America’s arsenal, but it’s not a sufficient one on its own.

Ironically, that has less to do with funding than the maturity of U.S. electromagnetic systems generally. The unique (and freakishly complex) pulsed-power architecture required to fire off multiple shots at 32 megajoules of muzzle energy in the span of a minute still poses a major obstacle for Navy engineers, according to both congressional and Navy sources. The issues have proven indomitable enough that ONR and NAVSEA are still conducting rep-rate tests at Naval Surface Warfare Center Dahlgren Division (NSWCDD) with the goal of reaching a target capacity for 10 shots a minute — well beyond the 4.8 shots-per-minute rep-rate flaunted by ONR in a July 2017 update on the railgun’s progress.

These engineering obstacles have made other projects in the Navy’s direct energy portfolio more appealing: The Navy’s budget proposal calls for the continued development of the HVP initially developed as railgun ammo a decade ago. The Pentagon’s secretive Strategic Capabilities Office has in recent years shifted its priorities away from the supergun in favor of rapidly proliferating the specialized shell for use in conventional artillery; in 2016, SCO even announced it had also Army and Air Force to quickly develop a new Hypervelocity Gun Weapon System independent from the electromagnetic railgun to accommodate the lethal new projectile.

In addition, Popular Mechanics points out that recent breakthroughs with conventional solid-state laser weapons have induced the Navy to propose $300 million to rapidly develop and equip shipborne laser weapons to fend off explosive-laden drones and small boats that could harass smaller Navy warships. The service recently announced that it planned on outfitting guided-missile destroyer USS Arleigh Burke with a 60-kw Surface Navy Laser Weapon System as part of an integrated missile-and-drone defense system by 2020. With the entire DoD laser-focused (lol) on modernization and lethality, proven directed energy systems like the HVP and SNLWS are eminently more appealing than a railgun system that’s still in the early stages of testing.

So is the Navy’s electromagnetic railgun alive or dead? The answer is, unfortunately, both. While broad RDT&E; efforts on electromagnetic tech will certainly continue under the watchful eye of ONR engineers, shifting budget priorities and technological hurdles may condemn the supergun to a limbo in anonymous labs and distant proving grounds until the technology is finally mature enough for the Pentagon to make a decision about its procurement and fielding.

Until then, the electromagnetic railgun will remain the defense tech version of Schrödinger's cat, both alive and dead in a state of constant quantum superposition until a single momentous (subatomic) event occurs. And the Navy and SCO had better hurry up and get there because China’s electromagnetic railgun prototype is very much alive.