Did The Navy Just Admit The Littoral Combat Ship Is A Failure?

After years of cost overruns, underwhelming demonstrations, and debilitating mechanical failures, the Navy appears to be looking to supplement the... 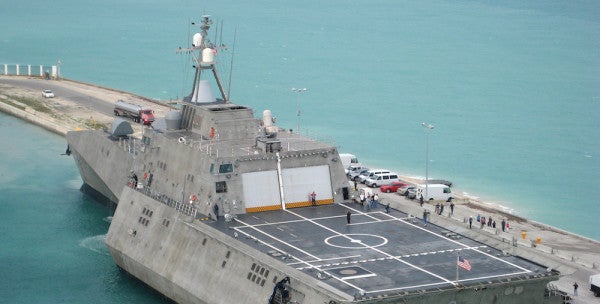 After years of cost overruns, underwhelming demonstrations, and debilitating mechanical failures, the Navy appears to be looking to supplement the troubled littoral combat ship program with a new ship to serve the same purpose, but better.

The Navy posted formal requirements for a new frigate design on July 11 under the auspices of the Guided Missile Frigate Replacement Program or FFG(X). While the request doesn’t explicitly identify the FFG(X) as a successor to the LCS, meant to replace the its Cold-War era cruisers as small surface combatants, USNI News passive aggressively described the FFG(X) project as a ship “much like the Littoral Combat Ship that currently fills the small surface combatant role.”

More importantly, the RFI stated that proposals should include plans for a production run of 20 ships, with the first keel laid in fiscal year 2020. That 20-ship fleet may fill the gap created when the Pentagon in 2014 announced plans to cut the number of LCSs ordered from Lockheed Martin and General Dynamics as part of a 30-year contract down from 55 to 32 in 2014.

From the looks of it, this RFI suggests that the Navy is finally ready to bail on the LCS for, well, a way better version of the LCS.

“In many ways, this FFG(X) design goes beyond what today’s LCS can do, particularly as it relates to surface warfare,”as USNI News put it. “The RFI states the frigate should be able to conduct independent operations in a contested environment or contribute to a larger strike group, depending on combatant commander needs.”

But why launch a new program instead of just upgrading the existing LCS fleet? According to The Drive, the “up-gunned” Small Surface Combatant version of the LCS costs an additional $70 million and still has one major flaw: It lacks air defense capability. The FFG(X), on the other hand, “will include integrated operations with area air defense capable destroyers and cruisers as well as independent operations while connected and contributing to the fleet tactical grid.”

In 2010, the Navy intended to begin a 30-year procurement cycle wherein it would purchase 55 LCSs for $40 billion, and Assistant Secretary of the Navy Sean Stackley estimated the average cost to buy an LCS would be between $430 and $440 million, but in fiscal year 2011, the unit cost was $1.8 billion, according to a budget analysis.

And that’s a lot of cash for a vessel plagued by highly embarrassing malfunctions. The Motley Fool reported that the USS Milwaukee had a clutch failure in December 2015; a month later, the USS Fort Worth suffered $23 million worth of damage to its engines; the USS Freedom had a seawater leak in July 2016 that required an engine replacement; and the USS Coronado experienced an “engineering casualty” during its maiden voyage in August 2016. We think of the LCS as the F-35 joint strike fighter of the ocean, albeit significantly less expensive.

So far 11 of the ships are in service — the most recent being the USS Gabrielle Giffords, which was commissioned on June 10, 2017.

Task & Purpose has reached out to Fleet Forces Command for comment, and will update this story as more information becomes available.