As tensions reach a fever pitch between the U.S. and North Korea, with Pyongyang announcing its intentions to fire missiles towards the... 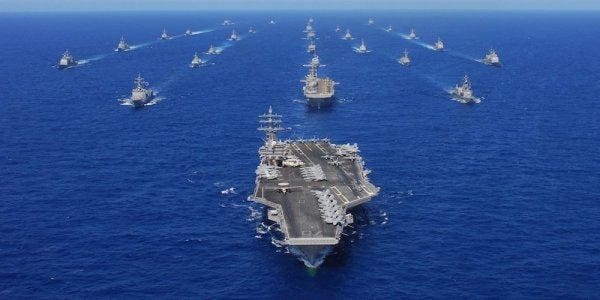 As tensions reach a fever pitch between the U.S. and North Korea, with Pyongyang announcing its intentions to fire missiles towards the U.S. territory of Guam, the U.S. Navy has continued to patrol and span the entire Pacific ocean with power and reach unparalleled on earth.

Near Japan, within a short steam of Guam and the Korean Peninsula, sits the USS Ronald Reagan aircraft carrier strike and the guided-missile destroyers and cruisers in its strike group.

The Reagan's strike group is the only forward-based aircraft carrier in the U.S.'s arsenal and trains specifically for Asia-Pacific-specific missions. One of the destroyers in the group recently conducted freedom of navigation operation against excessive Chinese maritime claims in the South China Sea.

Further south, in the Singapore Strait, the USS America, one of a new class of small deck aircraft carriers packed with V-22 Ospreys, and Harrier jump jets, and Marines ready with landing crafts to take any beach, is making its way to the Middle East, according to the U.S. Naval Institute.

Near Eastern Australia, the Naval Institute notes that the USS Bonhomme Richard amphibious readiness group (like a carrier strike group but for the smaller carriers) has the same aircraft setup but increased well decks and landing craft to launch Marines to take any beach in the world.

Each of these carrier groups sails with guided-missile destroyers that pack some of the world's best missile defenses. In the event that North Korea follows through with a plan to fire missiles near Guam, any one of these groups of ships has a good shot at knocking these missiles down.

But even with its scattered assets across the Pacific, the U.S. is not on war footing towards North Korea. This simply represents a day in the life of the Navy's massive fleet.

For more information on the U.S. Navy's fleet and current operations, visit the U.S. Naval Institute's Fleet and Marine Tracker.