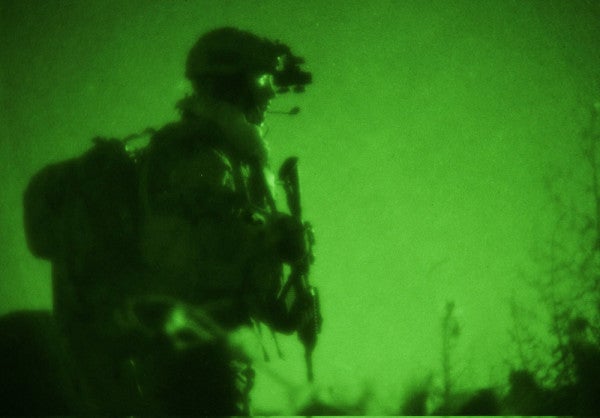 At a conference near Washington, D.C., in February, the commander of all Navyspecial operations units made an unusual request to industry: Develop and demonstrate technologies that offer “cognitive enhancement” capabilities to boost his elite forces' mental and physical performance.

“We plan on using that in mission enhancement,” Rear Adm. Tim Szymanski said. “The performance piece is really critical to the life of our operators.”

Szymanski expanded on his remarks in a brief interview later, saying he has his eye on a number of technologies, including pharmaceutical aids. But the results of one breakthrough involving the direct application of electrical stimulation to the brain have particularly caught his eye.

“In experiments, people who were watching these screens … their ability to concentrate would fall off in about 20 minutes,” Szymanski said. “But they did studies whereby a little bit of electrical stimulation was applied, and they were able to maintain the same peak performance for 20 hours.”

Transcranial electrical stimulation was one of the technologies touted by then-Defense Secretary Ash Carter in July 2016 as part of his Defense Innovation Unit (Experimental), or DIUx, initiative. Since then, multiple SEAL units have begun actively testing the effectiveness of the technology, officials with Naval Special Warfare Command told Military.com

“Earlier this year, Naval Special Warfare units, working with DIUx, began a specific cognitive enhancement project with a small group of volunteers to test and evaluate achieving higher performance through the use of neuro-stimulation technology,” Capt. Jason Salata, a spokesman for the command, said in a statement.

The elements testing the technology include Naval Special Warfare Development Group, the unit known more popularly as SEAL Team Six. Other teams are also conducting tests, Salata said. He declined to confirm how many operators are participating in the testing, or to cite specific findings to date. But there have been positive outcomes so far, he said.

“Early results show promising signs,” he said. “Based on this, we are encouraged to continue and are moving forward with our studies.”

The company that makes the brain-stimulating device — a headset that could be mistaken for a pair of Beats by Dre headphones — is Halo Neuroscience. And the technology offers not cognitive enhancement, but neuro-priming, Chief Technology Officer and Company Co-Founder Brett Wingeier told Military.com.

Developed for elite athletes, the headset purports to work by stimulating the brain to enter a state of hyper-elasticity, allowing users to learn better and more efficiently. In physical training, he said, the technology has proven useful in developing explosive power for athletes whose sports require vertical leaps or sudden starts.

“Whatever you're training on as far as a movement-based skill,” he said, “if you do deep practice, hard repetition, this accelerates the benefit of that.”

In a study conducted with the U.S. Ski and Snowboard Association, ski jumpers observed a 13 percent gain in propulsion force and 11 percent gain in jump smoothness compared with a control group over four weeks of using the device, according to data promoted by Halo. As testimonials note, marginal improvements can make a big difference for elite athletes — a statement arguably true of special operators as well.

For the notoriously hard-training and sleep-starved SEAL community, the device offers greater efficiency in training, allowing operators to train less and see the same results, or train at the same level and get a boost in performance.

“They're training at this amazingly high level, and the amount they can train is actually limited by things like physical recovery,” Wingeier said. “They want to be able to maintain those incredible physical standards as efficiently as possible. That helps them avoid injury. If I was to sum it up, it's kind of all about just training a little bit smarter.”

Wingeier said the number of Halo devices being used by elite units for testing is “in the double digits,” adding they are being tested at five military installations. Even compared with the athletes the company has previously worked with, he said the focus and determination of SEALs is impressive.

“It was a real learning moment for us about special operations and about the military. It's super impressive just how enormously skilled everybody is,” he said. “They spend a lot of time thinking about what they do and honing their craft. A lot of what they're interested in is, in terms of physical training, they want to build and maintain these amazing physical skills, but to just do so as efficiently as possible.”

Although some experts have warned that the full long-term side effects of using neuro-priming to improve performance may not be known, Wingeier said lab tests have repeatedly proven that the product, which is commercially available in a sport configuration, is safe.

But Andrew Herr, CEO of research firm Helicase and an adjunct fellow with the Center for a New American Security, suggested the question of side effects should be approached more leniently when dealing with troops whose lives are at risk in combat.

In the context of medical or pharmaceutical performance aids such as modafinil — commonly used by fighter pilots — or amphetamines, he said there has been significant resistance in the medical community to prescribing them as performance enhancements because of their inherent side effects.

“The concept's that if you're not healing, then no side effects are worth it or acceptable,” he said. “[But] when you're sending people into combat situations where their lives are on the line, the ethics are flipped … I think actually we are thinking about ethics all backward in this field because the military has a unique requirement. And it's even more powerful in the special operations field.”

The most useful proven performance aids are much lower-tech than transcranial direct-current brain stimulation, Herr said. They include things such as performance nutrition, supplements, legal stimulants such as caffeine, and even meditation, which has been proven to improve focus and attention and decrease the effects of not getting enough sleep.

In addition to neuro-priming, Herr said technologies, including application of light frequencies and biometric feedback, have been shown to boost performance and cognition.

Regardless of the technology or method, he said it is important that the military conduct robust tests and demonstrations on aids to human performance, contributing resources to making the warfighter stronger and more resilient the way it did to developing cutting-edge aircraft and gear.

“You really want to test these things in high-end training environments, which could tell you, do these matter in a warfare scenario,” he said. “We need to really believe that investing in the human makes sense.”

Szymanski signaled an interest in testing other performance-enhancement technologies, as well as pharmaceutical aids such as blood testosterone in the future. But he said he's approaching the field of enhancements carefully, with an eye to side effects, and warning operators not to take the first steps on their own.

“I'm always anxious, because I'm in a community of risk-takers,” he said. “Guys may want to try experimenting on their own, which is against policy and has to be completely drug-tested and those types of things. So I'd want to do that in a very systematic kind of way.”