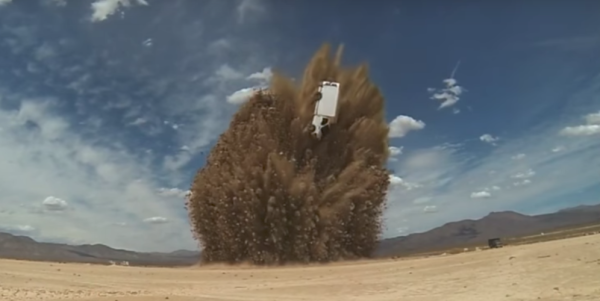 Nestled in the southwest corner of the Mojave Desert, California’s Naval Air Warfare Center Weapons Division — “China Lake” — is one of the finest military testing ranges in the continental United States. Home to 85% of the Navy’s weapons research and development, it covers an area larger than the state of Rhode Island. A cradle for destruction, the range has given birth to the Sidewinder, Hellfire, and Tomahawk missiles; the Joint Direct Attack Munition in high demand by both the Navy and Air Force; and a plethora of unusual testing facilities for electronic warfare to unmanned aerial vehicles.

There’s no better place on the planet to blow shit up — and this ridiculous sizzle reel of China Lake explosions proves it:

The highlight reel of NAWCWD weapons tests conducted during 2016 captures Navy personnel up to their elbows in missiles and rockets, demolishing mock radar towers, storage vehicles and bunkers; annihilating tactical vehicles, commercial sedans, and drydocked boats; sniping missiles out of the sky; and even launching pickup trucks ass-over-elbows into the sky amid a spray of dirt and fire.

According to the War Zone’s Tyler Rogoway, who first surfaced this explosive footage, weapons tested in the brief video include the GBU-31 JDAM, which is currently getting a workout downrange in Iraq and Syria; Tomahawk cruise missiles; and the SeaRAM-fired RIM-116s that currently keep Navy vessels safe from incoming enemy munitions.

Here are some of my favorite scenes, in GIF form:

The only thing missing from this montage of destruction is some AC/DC. Next time, perhaps.