This week, Hudson Mfg launched the H9, its new striker-fired 9mm 1911 hybrid. This new pistol is looking to tap... 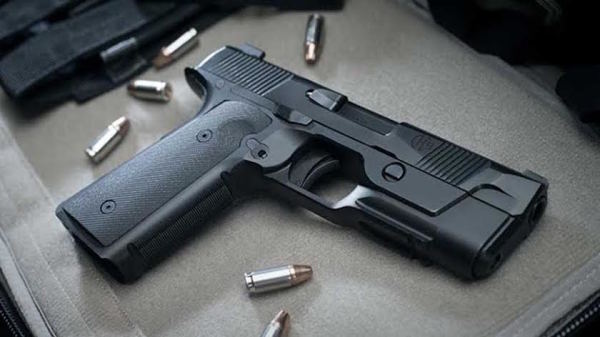 This week, Hudson Mfg launched the H9, its new striker-fired 9mm 1911 hybrid. This new pistol is looking to tap into two of America's major handgun markets, hoping to appeal to both die-hard 1911 fans (and competition shooters who favor the venerable Colt for its power and accuracy), as well as the huge 9x19mm pistol market.

Back in November 2016, a new firearms manufacturer, Hudson Mfg, announced its first pistol. The hype surrounding the pistol grew as Hudson's website teased the pistol's attributes and appearance without giving away too much. Hudson's site was dominated by a clock that counted down until the pistol's unveiling. The countdown ended a couple of days ago and Hudson Mfg's H9 pistol was unveiled ahead of its official launch at SHOT Show 2017 next week.

The H9 is the brainchild of the Texas-based, veteran-owned manufacturer with the design itself coming from Billie Cyril Hudson and Eugene Cannon Kane. The H9 has a hammer-forged, stainless-steel slide and frame, is chambered in the ubiquitous 9x19mm round, and has a double stack 15-round magazine. The new pistol boasts interchangeable grips, ambidextrous controls and a Trijicon front sight. Pretty standard fare from most manufacturers today.

So what sets the pistol apart from the rest of the already over-saturated, U.S. pistol market? The H9 combines some of the ergonomics and controls of the legendary Colt 1911 with the striker-fired action of most modern 9x19mm polymer-framed pistols. The John Browning-designed 1911 is widely revered, not only for its long service as the U.S. military's standard-issue sidearm, but many believe it has the best trigger of any handgun designed before or since. The trigger is often described as short, light, and crisp lending to the weapon's inherent accuracy. Browning's trigger is distinct in that it travels straight along a single axis instead of hinging like many other triggers. The benefit of this is that it has a short take-up and reset.

One of the main highlights of the new pistol's design is its low bore axis, where the shooter's grip of the weapon is as high as possible to be inline with the barrel, which contributes significantly to how flat shooting a pistol is. The new Russian Kalashnikov Concern PL-15 pistol, developed by Dmitry Lebedev, is a prime example of an emerging generation of pistols with low-bore axis.

Related: These Heaven-Sent Hand Cannons Cost $4.5 Million And Are Made Of Meteorite »

Unlike the original 1911, however, the H9 uses a striker rather than a hammer-fired system. It also has a double-action trigger and features a paddle “safety” integrated into the trigger itself. This is a feature most often associated with the Glock series of pistols, but has since become ubiquitous across the pistol market. For the purists who dislike the paddle system, Hudson's press release concedes that “the trigger of the H9 can be replaced with a Hudson trigger that does not contain the integrated trigger safety.” While the stock version of the H9 does not have external safeties, Hudson have announced that a thumb safety similar to the 1911's can be added.

Image via US Patent and Trademark Office

With Hudson's goal of retaining the Colt 1911's most-loved ergonomic features, it appears the distinctive grip 118-degree angle has been retained along with the Colt's beavertail. However, the 1911's grip safety, built into the beavertail, has been removed in favor of the new trigger paddle safety. This removes any potential beavertail 'pinch' when shooting. Aesthetically, these two design choices help retain some of the 1911's iconic appearance.

Image via US Patent and Trademark Office

While the rear half of the H9 may hark back to Browning's historic pistol, the front of the weapon's frame is far from the norm. The pistol has a large blocky housing in front of the trigger guard, which gives the pistol a distinctly modern, sci-fi feel. While teaser images showing the front section of the pistol led many to speculate the housing contained a built-in weapon light, this proved not to be the case. Instead examination of some of the H9's patent drawings show that the housing contains the gun's recoil spring assembly. If you wish to attach a weapon light or laser, the H9 has a rail groove cut into the base of the spring housing.

Typically, many handguns have positioned their recoil springs below the barrel but within the slide. The H9's spring is located in the frame of the pistol, Hudson claims that this improves the weapon's balance. One of its patents, published in February 2016, explains that placing the recoil spring assembly below the bore axis directs the force of recoil directly back reducing muzzle flip and torque around the shooter's wrist.

How do the H9's stats match up with the industry-leading Glock 17? Unloaded, the Hudson weighs almost 10 ounces more than the Glock, it is also 0.1 inches wider and has a shorter sight radius. However, the H9's trigger pull is one pound lighter and shorter than the Glock's and the Hudson is 0.3 inches shorter overall. The H9 will feel very familiar to the hands of a seasoned 1911 user with comparable width, weight and length. Price-wise, the H9 will launch with a manufacturer's suggested retail price of $1,147, far closer to the cost of a high-end 1911 than that of a Glock.

It remains to be seen if the H9 lives up to the hype surrounding Hudson Mfg's slick social media campaign, videos, and teasers. After all, Hudson is a new company and the H9 is a new pistol, but the design is promising and has some interesting attributes. It will be officially launched at SHOT Show next week.