After less than a decade of use, the Navy's blue camouflage uniforms are on their way out in the Pacific... 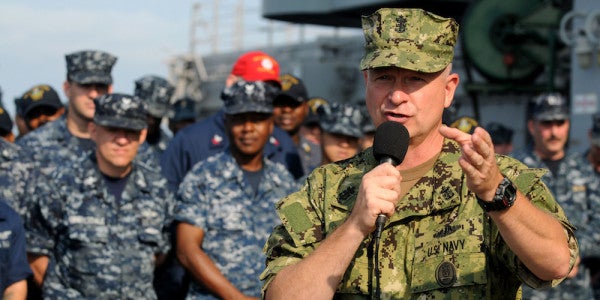 After less than a decade of use, the Navy's blue camouflage uniforms are on their way out in the Pacific Northwest.

The Navy Exchange Service Command completed an early rollout of the Navy's new working uniforms last week, bringing the green-and-tan woodland digital camouflage replacements to the shelves of local exchange stores more than a year ahead of schedule.

That means during the course of the next year, more sailors will begin wearing the green camo.

Petty Officer Second Class Jason Kraften, who serves aboard the USS Ohio, visited Bangor's uniform shop on Thursday afternoon to pick out his new uniform the first week they were available on base.

“I'm excited for it,” Kraften said. “I like the green, although I did like the blue because it was unique to the Navy, but change is always good.”

He's looking forward to the new boots that go along with the uniform change.

“These boots are incredibly more comfortable than the old ones,” Kraften said. “I'm thankful for that, and they're a lighter weight. So, we'll see how they hold up in the rain.”

The only downside for Kraften: waiting for all of the patches to be sewn on. His newly purchased uniforms won't be ready for pickup until Feb. 2.

Bangor uniform shop seamstress Maria Rosal said the shop's team of seamstresses can turn out more than 100 uniforms complete with all needed insignia each day.

The uniform is intended for wear ashore and in port. Underway, sailors will continue to wear navy blue coveralls.

The new working uniforms were originally scheduled to roll out in the continental U.S. on a 24-month cycle, starting with new sailors from Recruit Training Command, Great Lakes and newly commissioned officers from Officer Candidate School who would leave with the green camouflage in their sea bags as of October 2017.

Navy Region Northwest was supposed to be the last region to get the new working uniforms in stores in March 2019.

The uniforms are now available in all NEX stores in all regions and will be available online by the end of the month.

Navy Exchange Service Command spokeswoman Courtney Williams said the command wanted to bring the uniforms to as many sailors as it could ahead of schedule after the positive response from the first rounds dissemination.

“We heard from a lot of sailors how excited they were to have this uniform, and we listened to our sailors,” Williams said.

The green Type III uniforms will officially replace the blue Type I as the Navy's primary daily working uniform on Oct. 1, 2019. Until then, sailors can wear either the blue or green uniforms at the discretion of their unit commander or commanding officer.

Although the green camouflage will be new to most sailors, Navy Expeditionary sailors have been wearing the Type III uniform for the past six years.

As of right now, sailors are required to purchase black boots to go along with the uniforms, but they also have the option to wear brown coyote boots at the discretion of their command.

Despite the early rollout date, the Navy is not planning on moving up the service-wide requirement for all sailors to have the new uniform in their sea bags by 2019, although it is up to the discretion of each command if they wish to do so, said Chief of Naval Personnel spokeswoman Sharon Anderson.

Cricket Mathews, general manager of the Bangor NEX's uniform shop, said the Navy was able to bring the uniforms to the northwest more than a year of schedule because of the simple fact they had been produced and were ready to hit the shelves.

“It just went faster than they expected in terms of sewing and getting them ready to ship,” Mathews said.

It's $254 to purchase a full set of all required parts of the uniforms, not including any other extras a sailor may want or need for their sea bag.

To help sailors cover the cost of the new uniforms, the Navy instituted a two-year bump in annual uniform allowances through 2019. Officers have to cover the cost out of their own pocket.

USS Alabama sailor Petty Officer Third Class Tom Gregg already has one complete set of the green camouflage and he's looking to slowly add the rest of the new gear he'll need into his sea bag over the next year.

“It's pretty expensive,” Gregg said. “Every so often we get our uniform allowance, and of course mine doesn't come until April, so with me being married and having kids, I can't just buy everything at once.”

“If they could have done the blue uniforms in the new type of material, I would've been happy because now I'm going to look like a Marine or something wearing the green uniforms.”

Gregg also said the color change made it more difficult to discern what patches were on someone's uniform.

“The insignia is all black, so it blends right into the new camo,” Gregg said. “So then you're like, 'Oh! You're an officer.'”

“The fit is a little bit more snug. There's not as much loose fabric,” Stewart said. “They feel more comfortable because of the material.”

The new uniforms are also supposed to be more durable.

“The new uniforms are made out of rip-stop nylon cotton, so it's a more durable fabric and if it does rip, it won't rip even further,” Williams said.

In addition to the color and fit changes, the insignia and name tapes on the Type III uniforms are placed in different spots than on the Type I.

“There's no insignia on the collars and the parka insignia is on the right instead of the left, but that matches their name, and so that's why that change was made,” said NEX store manager Dwayne Davis.

As of Wednesday, both the stores at Bangor and Bremerton have already outfitted more than 650 sailors. And they're ready for more.

“Our stock levels are really good, and the flow of getting more should be pretty regular,” Davis said. “So there shouldn't be a problem with getting the size you need.”