The old adage is that imitation is the highest form of flattery, and if that’s true, then hey guys, looks … Continued 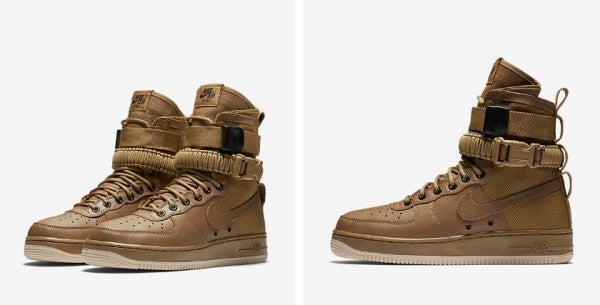 The old adage is that imitation is the highest form of flattery, and if that’s true, then hey guys, looks like we made it.

Nike’s new kicks are called the Special Field Air Force 1, which the company refers to as the SF AF 1, because civilians think acronyms are “dope” or something. Visually, they look a lot like the combat boots troops in Iraq and Afghanistan wore. Fortunately, these sneakers probably won’t give you blisters, make your feet smell like ass, or rub the tops of your toes raw because of how it bends when you run, like boots do.

The shoes come with a pair of removable ankle straps, an “espionage pocket” for easy storage, and an exclusive “military-inspired” carry bag.

It’s not a mystery why Nike is making a military-inspired sneaker: Combat boots look cool to anyone who hasn’t had to wear them every day for months on end in the sweltering desert heat. I’m just wondering if that “military-inspired” bag comes with foot powder and a change of socks.

Nike’s newest addition to its iconic Air Force 1 line comes out on Nov. 5 in men and women sizes, in “faded olive” and “golden beige,” aka olive drab and coyote brown.