Now’s Your Chance To Command Your Own Private Air Force

A lot of guys dream of buying a boat when they retire from the military. Some have their eye on... 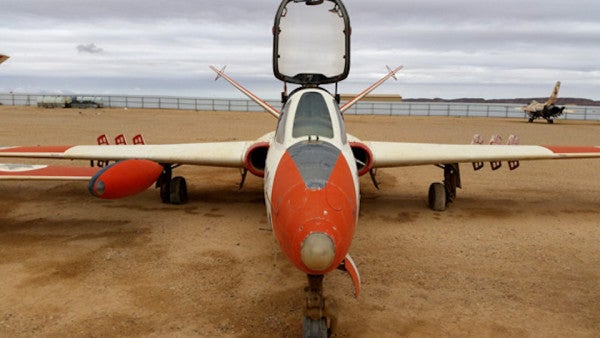 A lot of guys dream of buying a boat when they retire from the military. Some have their eye on an RV, or a vintage Indian Chief with the original sidecar. Each option is appealing in its own way. But nah … Not if you can pick up your own private air force for the price of a split-level tract home.

And no, this is not about drones. Fuck drones.

An outfit called Raptor Aviation based in Port St. Lucie, Florida, is unloading 20 light-strike aircraft, upgraded French Fouga CM.170 Magisters, custom built in the 1950s for the Israeli Air Force. Known as the Tzukit, this is the jet fighter the IAF trained its pilots on until 2010, and the model even played a role as close support aircraft in the Six-Day War. The plane has a “single midwing, two cockpits in tandem, three-point landing gear, and V-shaped tail assembly,” according to the listing. It also comes equipped with a liquid oxygen system and an anti-collision feature, which could really come in handy since you probably have no idea how to fly one.

But really, how hard can it be?

Admittedly, these planes have seen better days. But the lot comes with a ton of spare parts. A little tune up and you’re good to go.

Think about it. No more sitting in traffic, dreaming of running down protesters. No more flying commercial with all those crying babies, obese seatmates, shoe bombers, crazy-flight attendants, and all the other rabble. Need a little vacay? Pop over to the Vineyard or the British Virgin Islands, and bring a friend (there’s two cockpits!). And for anyonethinkingofseceding from the United States, a fleet of fighter jets is sort of a must.

So forget the fishing boat. This is your destiny. They call you “Maverick” — wild, dangerous, unpredictable, arrogant. You fly by the seat of your pants. There’s a bandit on your tail. You’re on a highway to the danger zone, and Kelly Mcgillis won’t leave you alone. As long as your ego isn’t writing checks your body can’t cash, you’ll have nothing but clear skies ahead.