The Joint Light Tactical Vehicle is meant to be everything the Humvee is not: It’s designed by Oshkosh Defense to... 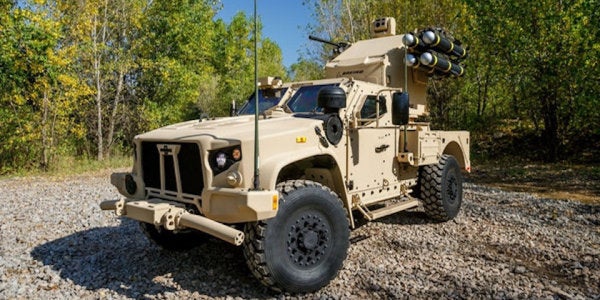 The Joint Light Tactical Vehicle is meant to be everything the Humvee is not: It’s designed by Oshkosh Defense to withstand the ground-based IED attacks early on in the Iraq and Afghanistan wars that had forced Humvees to armor up, reducing payloads and performance, and slowing brigades to a crawl. With a modular design to accommodate armor plating fit for an MRAP, Oshkosh hopes the first 600 JLTVs, set for fielding by the Army and Marine Corps in early 2019, will represent a quantum leap forward for the Department of Defense’s light truck fleet.

Dave Diersen, vice president and general manager of joint programs at Oshkosh, helped show off two new JTLV versions on the floor of the Association of the U.S. Army’s annual meeting in Washington on Oct. 10. He also spared the old Humvee no mercy. “My son is of the age where he could join the military,” he told Task & Purpose. “If he was assigned to an up-armored Humvee, I’d say go to Canada or go to jail.”

But while passersby spent much of their time ogling the muscular general-purpose variant of the truck on the convention center floor, Oshkosh also unveiled a deadly iteration of the much-anticipated vehicle: a JLTV outfitted with surface-to-air missiles, designed to make good on Army Chief of Staff Gen. Mark A. Milley’s vision of a land force that can rule the skies.

A Joint Light Tactical Vehicle outfitted with a Boeing SHORAD missile launcher and an arsenal of Hellfire missiles on the floor of AUSA on Oct. 10, 2017.Jared Keller

The Hellfire-enabled JLTV represented a major addition to the SHORAD requirements that the upgunned GDLS Strykers were designed to fill in Eastern Europe. Dierson told Task & Purpose that, if accepted by the Army, the Hellfire JLTV could potentially end up fielded by as early as January 2019.

But Oshkosh showcased the JLTV not just to check a strategic box for the Army, but to highlight the vehicle’s unprecedented modularity. The general-purpose JLTV featured:

Eventually, the JLTV could see the integration of a .50 caliber machine gun and Javelin missiles, not unlike those on the Stryker MSL.

“We designed the JLTV as a 30 to 40 years platform,” Dierson said. “The modularity wasn’t just developed for flexibility downrange, but to provide room for growth regarding armor requirements and future weapons systems.”

With the modular system, he added, “You could easily deploy a cowcatcher if you needed it.”

But while General Dynamics was the first to unveil a Hellfire launcher atop a ground vehicle — Hellfires are traditionally air-to-air or air-to-surface missiles — that MSL Stryker variant is different from the upgunned 30mm Strykers headed downrange in early 2018. In contrast, the Hellfire-ready JLTV also includes a M3P .50 cal machine gun, offering a dual weapons system that can address threats from both UAVs and fixed-wing aircraft (General Dynamics’ Kendall Linson told Task & Purpose the company planned on combining the Hellfire turret and 30mm cannon into a single weapons system the coming years).

A Joint Light Tactical Vehicle utility variant outfitted with a Boeing SHORAD missile launcher and an arsenal of Hellfire missiles on the floor of AUSA on Oct. 10, 2017. Note the inclusion of the M3P .50 cal machine gun on the Boeing weapons turret.Photo by Jared Keller/Task & Purpose

To that end, the JLTV is less a truck than a lethal Swiss Army Knife for infantry battalions. According to Oshkosh, weapons systems and armor can be swapped out on the fly in the field, allowing troops to rejigger their vehicles into one of more than 100 different configurations to achieve mission-specific goals. Dierson gave the example of RPG-resistant and EFP-resistant armor add-ons that, in the past, had boosted Humvee protection by sacrificing mobility and maneuverability in a given terrain.

“We've designed the JLTV to operate in any climate in any type of terrain,” Dierson said. “They can operate in hills and mountains of Afghanistan, the roads and byways or Iraq, the sands of the Pacific, really all those environments. They allow commanders flexibility to not be tied to roads or specific areas. They can take the fight to the enemy wherever they're at.

The flexibility of the vehicle offers potential operations well beyond the Army’s 10th Mountain Division and II MEF at Camp Lejeune, who are getting theirs by the end of 2018. The Air Force is set on purchasing 140 JLTVs for force protection, while U.S. Special Operations Command has reportedly “expressed interest” in the truck, as well.

Oshkosh's family of Joint Light Tactical Vehicles, all dolled up and ready for action.Photo via Oshkosh Defense

It’s also possible that the Navy may come calling, according to Diersen, although he declined to comment on any formal discussions with the branch. “They know where they have applications of up-armored Humvees,” he told Task & Purpose. “We would assume that they would either use light tactical vehicles or MRAPS, and the JLTV could actually assume those roles.”

Based on the unveiling of the SHORAD JLTV, it’s likely that Oshkosh will continue to roll out increasingly complex (and lethal) variants of the tactical vehicle to meet requirements of various branches. And based on the vehicle’s much-hyped modularity, the JLTVs that actually roll up on enemy forces downrange may end up resembling a fleet of Mad Max-style war machines, rather than a uniform brigade of sleek vehicles.