The United States military’s bomb shortage is bad and getting worse. As a result of the multinational bombing campaign against … Continued 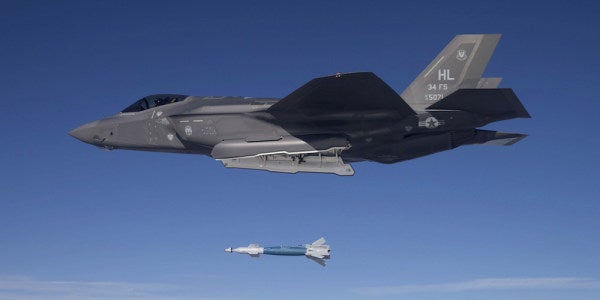 The United States military’s bomb shortage is bad and getting worse.

As a result of the multinational bombing campaign against the militants in Iraq and Syria, existing arsenals of smart bombs and other munitions are shrinking rapidly, forcing weapons manufacturers to scramble to expand production to meet rising demand from both U.S. and international militaries.

“We are short on things like Small Diameter Bombs,” U.S. Pacific Command Commander Adm. Harry B. Harris Jr. said in testimony before the House Armed Services Committee on Wednesday. “These are not exciting kinds of weapons … but they are absolutely critical to what we are trying to do, not only in North Korea but also in fights in the Middle East.”

This has been a problem for the Pentagon for more than a year. The U.S. conducted more than 9,000 airstrikes and dropped more than 65,000 bombs on ISIS targets as part of Operation Inherent Resolve between mid-2014 and the end of 2016, according to U.S. Central Command statistics — about $1.3 billion in bombs and missiles at the time. That pace led the White House to request $1.8 billion last year for some 45,000 new smart bombs as part of the Pentagon’s 2017 budget.

After news broke of that new munitions request in February 2016, Adm. Harris made a similar plea to the Senate Armed Service Committee to increase the Pentagon’s stockpile of precision-guided bombs.

“Critical munitions shortfalls are a top priority and concern,” he stated in his 2016 testimony. “Munitions are a major component of combat readiness. USPACOM forces need improvements in munitions technologies, production, and pre-positioning, but fiscal pressure places this at risk.”

The Small Diameter Bombs that Harris mentioned last week were originally produced for the Air Force by Boeing, as Defense One notes. As recently as this past March, both the Navy and Air Force had asked the weapons manufacturer to increase production bomb kits for use against ISIS targets abroad. The company plans on ramping up production from 1,000 units annually to 5,000 in 2018 and, potentially, some 8,000 bombs in 2019 — and on top of its plans to expand production of Joint Direct Air Munitions.

“We’re ramping significantly across the portfolio, not just with JDAM,” said Boeing direct attack munitions chief Cindy Gruensfelder told Military.com in March. “But with JDAM, we’re currently on a path by July of this year to ramp to 150 weapons a day or over 36,500 per year — that is two full shifts at our facility.”

It not just Boeing working to meet rising demand — and not just for the Small Diameter Bombs that Harris explicitly cited in his hearing last week. From Defense One:

In particular, U.S. and allies are burning through their stocks of Lockheed’s Hellfire missile, the signature weapon of Predator and Reaper drones. Helicopters and fixed-wing planes also carry the versatile laser-guided weapon.

“It requires a little bit of investment on our part to expand the factories, but the demand is there and we’re keeping up with it we’re staying ahead of it,” [Lockheed vice president for tactical missiles Frank] St. John said.

Lockheed has also “quadrupled our production capacity” at the Archbald, Pennsylvania, factory to meet demand from the U.S. and its allies for Paveway II laser-guided bombs.

The increase in production by companies like Boeing and Lockheed can’t come soon enough. According to analysis by Air Force Times, the Air Force has ratcheted up its bombing campaign since President Donald Trump took office in late January, with some 10,918 munitions deployed against ISIS in the first three months of the year — a 62% increase over the number of bombs dropped over the same time period in 2015.

But if the Trump administration wants to make good on the president’s campaign promise to “bomb the hell out of ISIS,” it will need to ramp up bomb-kit production over the next several years. Otherwise, it’s MOABs all the way down.