I always joke that I learned how to shoot way too young. I was five years old, a year before... 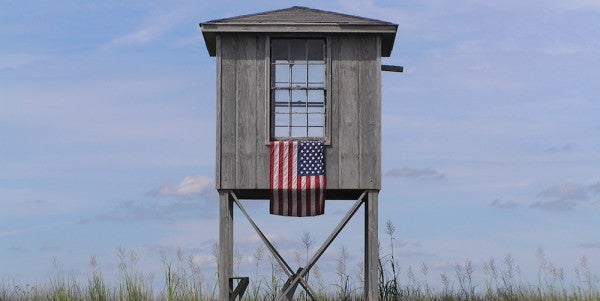 I always joke that I learned how to shoot way too young. I was five years old, a year before kindergarten, but my grandma always said I should have waited until I was at least seven. My first gun was a third-generation hand-me-down, a .22 caliber rolling block, single shot rifle. It was an old gun, created sometime in the late 1800s and handed down through my family until it landed in my hands back in the 1980s. I might give it to my nephew if he ever moves out of California.

But this isn’t about firearms. From first through fifth grade, my dad would bring me up to his deer stand just before dawn. It wasn’t actually a stand in a tree; it was built a couple feet off the ground in a clutch of trees on a hill overlooking a 20-acre corn field.  For you city folk, this is how it’s done in the old days; I grew up hunting, and the venison, rabbit, and groundhog we shot became our meat for the year.

My dad would fill two big thermoses, one with coffee for him and one with hot cocoa for me. We would trudge about two miles through the snow to get to the stand around 0500. I was wrapped like a mummy in a snowsuit, complete with those thick mittens with strings up through the arms so they couldn’t get lost. That kid in A Christmas Story was not exaggerated; this was northwestern Pennsylvania, and the winters created snow drifts eight feet high, and the farmers would always leave a few rows of corn in the fields for the hunters. I would lay down on and sleep under a mound of Army surplus wool blankets. His was the best hot cocoa ever; even to this day, I’ve never had better.

The stand was six feet by six feet and had a small wood stove and an open window that looked over the field. It was built out of old barn wood and tarpaper walls and the roof was tin with canvas overlay; the canvas was thick and covered with old moss. All of this was to keep it quiet in the rain; I figured out the noise-canceling quality built into this old stand when I was in the SEAL teams. I used some of my dad’s methods building sniper hides in countries far from home. He was a pretty smart cookie and taught me some good stuff.

Now, most deer stands were up 20 or 30 feet in trees built from two-by-sixes and plywood, and if you were lucky, it had sides to keep out the cold. I’ve fallen out a couple times from slipping or from an older stand just letting loose. These stands were often homemade out of whatever a farmer could hobble together. This brings up a good note to the FNGs: Never, ever climb up a stand you didn’t build yourself because it will break and you will fall.

Hundreds of hunters are killed or hurt badly every year from falls, but it's also important to note that you should always use a lowering line to get your unloaded gun up and down out of the stand. The danger of mishandling firearms is an important lesson learned the hard way, like never pee on an electric fence — but that is another story for another time

In the 1990s, companies started making some really cool metal prebuilt stands. These new-fangled stands would use a fulcrum point and straps so you could actually use them to climb up a tree, no ladders necessary. Now flash forward to 2018, I live on a farm with a neighbor who is a big businessman; He is self-made and started out in the old home built stands, but now he’s a little older and has more than a few bucks. And I’ll be damned if he doesn’t have a few deer stands that are like the Taj Mahal.

Consider theBuck Palace Platinum 360 by Redneck Blinds. By God, I’ve never seen a redneck all fancy, but this blind is a super fancy hunting palace. It costs around $3,000 for the base model; add a solid floor and other stuff and your quickly at five grand. It’s up on a tall Erector set foundation with a ladder and view ports perfectly lined up for an average shooter sitting in a comfortable chair. It also has floor to ceiling ports in the corners.

Price aside, this is probably the best stand I have ever seen; the shooting ports, positions and construction are just about perfect. My neighbor friend who paid full price calls it “high tech redneck,” and I have to agree with him. Heck, the only thing that would make this thing better is adding a Lazy Boy on swivels so you can swing around to any of the 360 degree view shooting positions. Kind of like the mounted gun turrets on top of our Humvees, but redneck-style.

Then there’s the Field and Stream Outpost Ladder Stand, which starts at around $200. It’s easy to put together and haul up into a tree, so far that a person could do the job alone, but two people makes assembly and setting up very easy and significantly safer. More importantly, you only need one tree, unlike homemade stands where you need a cluster. I also appreciate the safety arm that also acts as a gun rest: after an early morning hike to your stand and then sitting for a few hours, everyone dozes off, and this safety is sound enough to keep you from falling 20 feet.

The main thing thing I don’t like is how the chair sits against the tree, which only gives you about 200 degrees of shooting freedom. Then there’s the chair itself: I’d like to see the upper part of the chair have a crossbar and strap to the tree to secure it more firmly. Damn it, just build it with a 20 degree recline like most people sit; none of us have 90 deg perfect sitting posture except maybe Emily Post, and she doesn’t hunt. Oh, and bring a pillow to sit on, because while the mesh fabric is great standing up to weather and such, it's not comfortable after a few hours.

You might want to consider the Guide Gear HuntingClimber Tree Stand, which is incredibly simple: you basically just carry it with you out into the bush, find a good tree on a game trail and bam: you’re good to go. More importantly, the Hunting Climber Tree Stand starts at $70, which is a great price for a great piece of gear. This climber weighs in at 30 lbs, so if you are humping a long way, you know it’ll suck a bit. But suck it up buttercup: this weight is your safety. (Actually, looking at the entire Guide Gear line of equipment is a treat. They are a top-notch company with some really innovative and well-made stuff.)

The Hunting Climber Tree Stand isn't perfect, of course. The platform for your feet connects up to your boots with these cheesy straps, and as any SEAL would I added bungie cord and it worked better. The 300 lb capacity should be OK for most, but don’t forget to factor in all the stuff you carry up; If you weigh over 240, you might be cutting it close.

At the end of the day, though, nothing beat building your own. I own my land and set up five stands in different areas on the farm for different times of the day or depending on the weapon in use. The deer stand I use most of the year is an old homemade wood platform up about forty feet in the air. I built it solid as a rock and it was only about twenty bucks, although I’ve only gotten one buck back out of the deal os far.

The value of your tree or ground stand is not always dependent on the price — it is dependent on your weapon, location and game you are after. Consider all these factors when you build or buy your stand. I like the Field and Stream ladder stand near my pond for early morning buck hunt. Then, I use the permanent homemade stand at dusk with a black powder gun equipped with a four-power scope looking out over a corn field.

Sure, If you have the money, get the bigger sturdy ladder platform and add a couple cargo straps to beef it up. But if you own your own land and have the time, build a Taj Mahal and make it perfect for just for you. A few two-by-eights and decking with some two-by-four railing and side panels, maybe even an old Lazy Boy recliner, and bam: the redneck stand of your dreams.

Disclosure: This post may contain affiliate links, which means that Task & Purpose may get a share of revenue if you decide to make a purchase.