Ruger Is Breaking Into The Suppressor Market With A New Barrel

If you're looking to quietly plink in style, look no further than Ruger’s new integrally suppressed barrel, the Silent-SR ISB.... 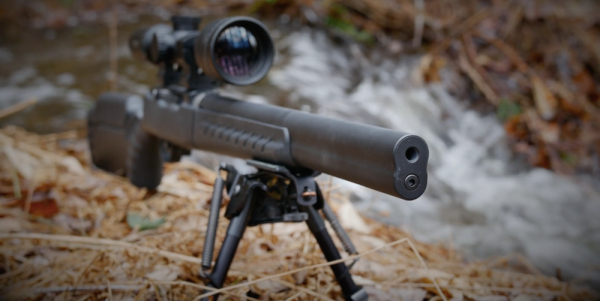 If you're looking to quietly plink in style, look no further than Ruger’s new integrally suppressed barrel, the Silent-SR ISB.

While Ruger is a household name — the firm’s 10/22 rifle has been in production since 1964 — it recently stepped boldly into the suppressed firearms market. With the Hearing Protection Act still working its way through Congress, the company has decided to jump into the growing hype around suppressors.

The new suppressed barrel debuted at the April NRA meeting in Atlanta and has since hit shelves. The Silent-SR ISB barrel weighs 2.6 pounds and is 16 inches long. It sports a 10.62-inch, non-ported barrel, which is followed by a series of six steel baffles that snap together, making up the suppressor.

The shape of the baffles gives the Silent-SR ISB the badass look of a superposed shotgun. The outer surface of the barrel is Cerakoted black with a black plastic foregrip. As anyone who frequently shoots .22LR knows, the ammo creates a ton of dirt and fouling. To deal with this, Ruger's suppressed barrel disassembles quickly — just grab a hex key and you’re set.

Potential buyers should note that Ruger isn’t currently offering the Silent SR-ISB as part of package with the rest of a rifle. The suppressor isn’t cheap, either — the suggested retail price is $629. And, as with all firearms suppressors, you'll need to file your National Firearms Act paperwork and pay the standard $200 duty to own one.

But if you’ve got the dough and are in the market for some quiet hunting or plinking, the Silent-SR ISB should be on your shopping list.