Russia's future MiG-41 fighter will be quite a machine. It won't just fly at supersonic speeds, but hypersonic as well.... 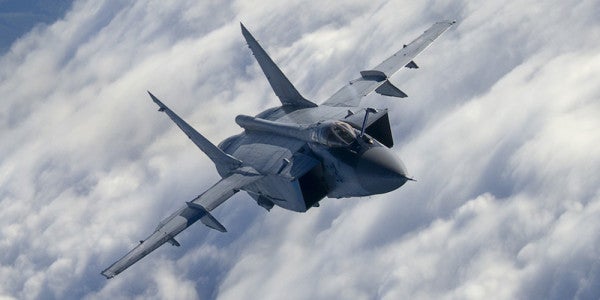 Russia's future MiG-41 fighter will be quite a machine. It won't just fly at supersonic speeds, but hypersonic as well.

Even better, it won't even operate on Earth: The MiG-41 will fly in outer space, according to Russian media, which has been breathlessly extolling the virtues of an aircraft that hasn't been seen and won't take flight for years.

Perhaps the only thing that's clear—or as clear as can be with Russian defense procurement—is that Moscow wants a successor to the aging MiG-31. The MiG-31—NATO code name Foxhound—is a Mach 3, high-altitude interceptor based on the famous MiG-25 Foxbat. But with the Foxhound's first flight back in 1981, it's not surprising that a successor in the works.

It's the alleged capabilities of the MiG-41 that raise a few eyebrows. The MiG-41 will have a speed of almost 3,000 miles per hour, according to a recent article by Russia news organization RIA Novosti (Google translation here). That would translate into a speed of about Mach 3.5. RIA Novosti terms the MiG-41 a “hypersonic” aircraft, though hypersonic is usually defined as speeds greater than Mach 5 (3,836 miles per hour). It will also be armed with hypersonic missiles, and the aircraft can even be turned into a drone.

As if that isn't enough, Ilya Tarasenko, director general of the MiG corporation, told Russian television that the MiG-41 will have unique capabilities. “In particular, it will be invisible to enemy radars and even be able to work in outer space,” according to RIA Novosti.

Invisibility to enemy radars—known to the rest of the world as stealth—isn't exactly new or surprising for a twenty-first-century jet fighter. But the reference to “outer space” puzzled even Russian media.

“What exactly is meant by this, he, unfortunately, did not specify,” lamented RIA Novosti, which did note that the MiG-31 can launch small satellites into orbit. Which isn't quite the same thing as the MiG-41 launching itself into orbit.

Outer space is generally considered to begin sixty-two miles high, or 327,000 feet. In 1963, a NASA X-15 aircraft reached an altitude of sixty-seven miles high, which remained a world record until the Space Shuttle (considered an aircraft rather than a spacecraft for this purpose) first flew in 1981. However, the X-15 was a rocket plane and the Space Shuttle a glider mated to giant rocket boosters. None of which would seem particularly applicable to a combat aircraft whose engines would have to function well enough to maneuver low in the Earth's atmosphere and at the edge of outer space, where the air is extremely thin at best.

To be fair, Russian media also points out that speed and altitude capabilities are more important than maneuverability for an interceptor. A fast, high-flying interceptor can be used to intercept ballistic missiles, for example.

MiG says its fighter will enter production in the mid-2020s. However, Western analysts believe the MiG-41 project is either too expensive for Russia, or won't be available until almost mid-century.

Nonetheless, one issue can already be addressed for the futuristic fighter: the MiG-41's NATO code name. Foxfish? Superfox? Foxy MiG?