Russia Says Its Armata T-14 Tank Can Fight On Mars

Russia's new T-14 Armata is one of the most advanced tanks in the world. So advanced, in fact, that Western … Continued 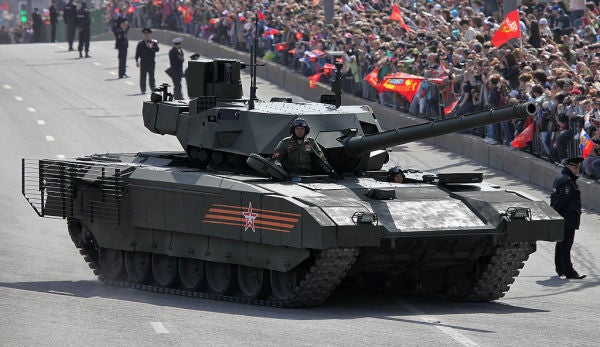 Russia's new T-14 Armata is one of the most advanced tanks in the world. So advanced, in fact, that Western nations worry that older tanks like America's M1 Abrams may be rendered obsolete.

But the T-14 is not only extraordinary, it’s interplanetary. The Armata tank can operate on Mars, according to Russian media.

Lest anyone worry that Vladimir Putin is planning to invade the Angry Red Planet with his Little Green Men, it turns out the truth is more down-to-earth. Sputnik News, never shy about trumpeting the awesomeness of Russian military technology, was actually citing an article from the Russian newspaper Izvestia(the Google English-language translation is here).

The Izvestia article described new technology, developed by Russian manufacturer Renova, that allows the Armata’s diesel engine to start in temperatures as low as -58 degrees Fahrenheit. The system uses supercapacitors to store a large quantity of electricity that can be used to power the tank even before the engine starts. It’s similar to that used by hybrid cars such as the Toyota Prius, which use a battery-powered electric motor at low speeds and then switches to a gasoline motor as the vehicle accelerates.

“We conducted a full-scale testing of a supercapacitor for the cold start of a tank diesel engine,” Renova expert Mikhail Lifshits told Izvestia. “The car stood for several days in the cold. Its batteries have completely lost capacity. Nevertheless, using a mobile power station on a supercapacitor…we were able to run a cold motor several times in a row.”

The technology allows the tank to carry smaller batteries, which frees up space to carry more fuel and ammunition. Does the United States have similar technology? The U.S. Army’s Tank Automotive Research Development and Engineering Center didn’t respond to queries. Honeywell, the company that makes the AGT1500 gas-turbine engine on the M1 Abrams, refused to discuss its cold-weather start capabilities.

Yet a Russian breakthrough in cold-starting tanks would not be particularly surprising. If any nation knows about operating tanks in freezing weather, it’s Russia. The Nazis were amazed at the Russian knack for keeping their vehicles running in the most brutal blizzards.

Nonetheless, the Izvestia article did not mention anything about starting up tanks on Mars. Perhaps this is because Mars is a bit colder than Siberia. With an atmosphere too thin to retain heat, the average temperature on Mars is minus -80 degrees Fahrenheit, and winter temperatures in the polar regions can dip as low as -195 degrees. Oymyakon, the Siberian town that's rated as the coldest permanently inhabited town on Earth, typically has winter temperatures of -60 degrees.

An internal-combustion engine would also be choking for oxygen in the thin Martian atmosphere. And in any event, landing a fifty-ton tank on Mars would be challenging: NASA’s 1976 Viking lander weighed only 1,300 pounds, while the plucky little Mars rover Opportunity—a vehicle that has traveled around Mars for thirteen years—weighs about 400 pounds. The Angry Red Planet is also jealous of its privacy: more than half of all Mars missions either malfunction, crash or disappear.

And for its last line of defense, Mars can rely on Marvin the Martian and his Illudium Q-36 Explosive Space Modulator. Earth tanks, beware.