Russia has developed a new modernized version of the Sukhoi Su-30SM Flanker-H that features upgraded avionics and weapons. Designated as... 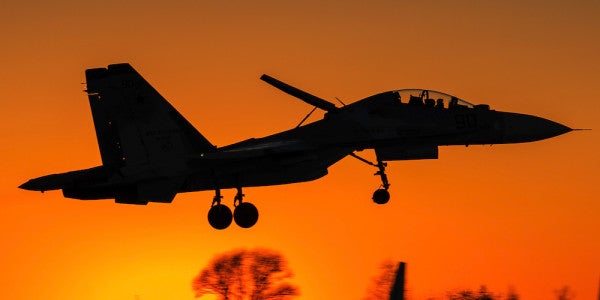 Russia has developed a new modernized version of the Sukhoi Su-30SM Flanker-H that features upgraded avionics and weapons.

Designated as the Su-30SM1, the aircraft leverages the operational lessons that Russia has learned during its operations over Syria, according to a report in the Russian-language newspaper Izvestia.

According to the report, Irkut—United Aircraft Corporation subsidiary that builds the Su-30SM1—has built several examples of the new variant of the jet. However, defense industry sources tell The National Interest that there is only one plane currently at the plant in Irkutsk.

The Su-30SM1 is likely features an upgraded stores management system and carries an expanded range of Russian precision-guided weapons including the KAB-250 and the Х-59МК2 air-to-surface missile according to the Izvestiareport.

The KAB-250 is Russia’s answer to the Pentagon’s 250-pound Small Diameter Bomb.

The Russian weapon is modular and can use GPS/GLONASS-corrected inertial guidance or it can be guided by laser. Meanwhile, the Х-59МК2 is a new version of the original X-59 anti-ship missile that is optimized to attack land targets. The new X-59MK2 gains the ability to strike at preprogrammed stationary land-based targets, but it is not clear if it retains the ability to warships at sea.

It is not clear what other upgrades are onboard the Su-30SM1.

The Izvestia article notes that the aircraft has a host of avionic upgrades, but the details of the exact nature of those modifications are not clear. Presumably, the aircraft has received upgrades to its sensor suite and communications hardware, which are usually continuously tweaked.

It is not particularly surprising that the Russians are upgrading the Su-30SM. The Russian Air Force has learned a lot of operational lessons from their Syrian operations that are now being applied to its combat aircraft fleet.

The Russians have been modifying other aircraft including the Su-35 Flanker-E and Su-34 Fullback bomber to correct issues they have discovered operating in Syria.

The Russians are expected to take delivery of some 17 Su-30SMs this year. Together with the Su-35S and the Su-34 Fullback bomber, the potent multirole fighter will form the backbone of the Russian Air Force even after advanced aircraft such as the Sukhoi T-50 PAK-FA enters service.

This article originally appeared at The National Interest