Russia Is Now Sending Its New ‘Terminator’ Tanks To Syria

Russia has sent an armored vehicle, known as the Terminator 2, to Syria. Russian media reports that a single BMPT-72 has … Continued 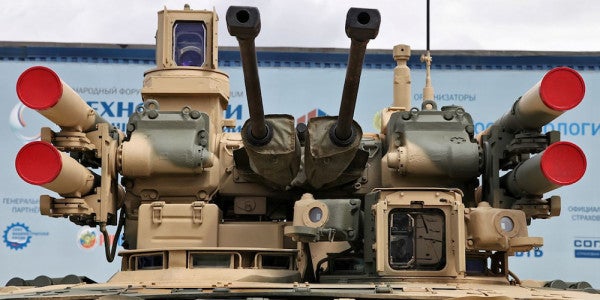 Russia has sent an armored vehicle, known as the Terminator 2, to Syria.

Russian media reports that a single BMPT-72 has been sent to Syria for testing. It was shown to Syrian President Bashar al-Assad last week when he visited the Russian base at Hmeymim.

The Terminator 2 is a tank that is designed to protect other tanks, especially in urban areas. It’s built from refurbished hulls from the venerable T-72 main battle tank. But instead of mounting a big 125-millimeter cannon, the BMPT-72 is armed a remarkably diverse suite of weapons that includes two 30 mm cannons, four Ataka-T antitank missile, and a heavy machine gun. This gives the Terminator 2 the capability to engage infantry and light armored vehicles with its cannon, and tanks and buildings with its guided antitank missiles.

The first version of the Terminator was designed in the late 1990s. It was a five-man vehicle based on the chassis of the T-90 tank, according to Russian media. It was armed with two hull-mounted thirty-millimeter automatic grenade launchers in addition to the other weapons, notes Jane’s 360. The Terminator 2, first unveiled in 2013, subtracted the grenade launchers and reduced the crew size to three.

The concept of the “tank support combat vehicle” arose after Russian experiences in Afghanistan and Chechnya, where numerous Russian tanks fell victim to insurgents armed with antitank rockets and missiles. The most notorious incident occurred in the Chechen capital of Grozny on New Year’s Eve, 1994, when large columns of Russian tanks and armored personnel carriers were ambushed and wiped out in the city streets by Chechen fighters armed with antitank rockets. That terrible night alone may have cost the Russians as many as four hundred armored vehicles and a thousand dead.

Russia’s initial response was to escort its tanks with ZSU-23-4 Shilka self-propelled antiaircraft guns, which could rapidly pump out cannon fire to suppress hostile antitank teams. However, the ZSU-23-4 was lightly armored and not equipped to detect ground targets.

Hence the BMPT was designed as a “versatile and mobile weapon for protecting tanks,” explained Sputnik News. “According to the initial conception, vehicles of this type should be used alongside tanks on the battlefield and destroy any potentially dangerous target.”

While the BMPT would seem to be an impressive vehicle, the Russian military doesn’t seem to think so. The Russian army never ordered the first version because the five-man crew was too large, the Ataka missile launchers were unprotected from enemy fire and the fire-control system was lacking.

But “the main disadvantage of the first Terminator was its high cost, since using the T-90’s chassis for an armored fighting vehicle of this type turned out to be prohibitively expensive,” Russia Beyond the Headlines notes.

Are prospects any better for the Terminator 2? This remains to be seen. While Russian media typically extols the virtues of Russian weapons, praise for the BMPT-72 is curiously guarded. RBTH cited a Russian military analyst who noted that while the Terminator 2 is “easier to operate, lighter, and cheaper” than the original, it also has “significantly less firepower. It can fire at only one target at a time, while the first Terminator could take down three targets.”

Conceptually, the Terminator 2 has merits. Much like the Israelis converting their older Merkava tanks into heavily armored troop carriers, a Russian support vehicle heavily armed with missiles and small-caliber cannon might be useful in engaging infantry while the main battle tanks like the T-90 go after big targets like enemy tanks. On the other hand, it’s a tank that isn’t a tank, which means using it will add more tactical complication on the battlefield.

No doubt the hope is that if the Terminator 2 performs well in Syria against rebels, this will induce the Russian army to place some orders.