U.S. Naval Forces Europe-Africa have released footage of a Russian Su-27 intercepting a US Navy EP-3 Aries signals reconnaissance aircraft over the Black Sea on... 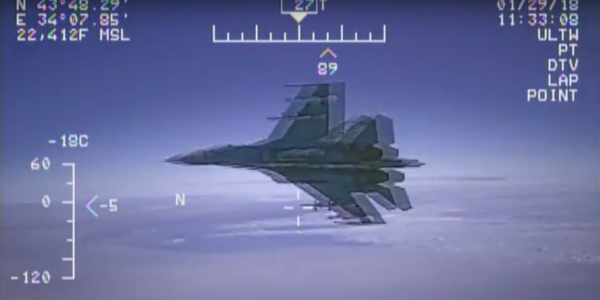 U.S. Naval Forces Europe-Africa have released footage of a Russian Su-27 intercepting a US Navy EP-3 Aries signals reconnaissance aircraft over the Black Sea on Jan 29.

“A U.S. EP-3 Aries aircraft flying in international airspace over the Black Sea was intercepted by a Russian Su-27,” the Navy statement read.

“This interaction was determined to be unsafe due to the Su-27 closing to within five feet and crossing directly through the EP-3's flight path, causing the EP-3 to fly through the Su-27's jet wash. The duration of the intercept lasted two hours and 40 minutes.”

Monday's intercept is the latest in a string of “unsafe” intercepts that the Russian military has conducted.

In November, a Russian Su-30 fighter flew as close as 50 feet before turning on its afterburners while intercepting a U.S. Navy P-8A Poseidon anti-submarine warfare aircraft over the same area, and in December, two Air Force F-22s were intercepted by Russian Su-25 and Su-35 jets.

The U.S. aircraft had to fire flares as warnings to the Russian jets, one of which “had to aggressively maneuver to avoid a midair collision.” Russia has denied the incident in Syria took place.