Last week, Task & Purpose reported that Sig Sauer’s P320, the basis of the U.S. Army’s new pistol, had been … Continued 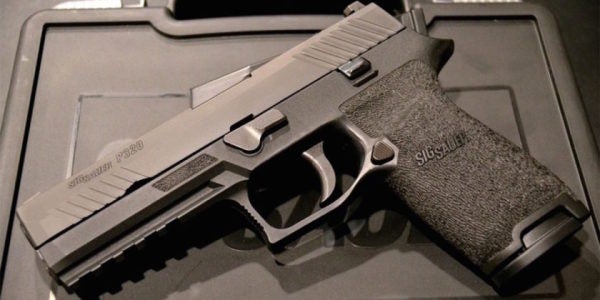 Last week, Task & Purpose reported that Sig Sauer’s P320, the basis of the U.S. Army’s new pistol, had been withdrawn from use by several police departments following reports of accidental discharges when the pistol was dropped. A drop test video made by gun store, Omaha Outdoors showing the P320 firing when dropped quickly went viral.

Sig Sauer initially denied the allegations, but subsequently admitted that while the pistol passed all industry-standard tests, there were instances of accidental discharge. As a result Sig Sauer announced on Aug. 8 that it would launch a voluntary upgrade program — not a mandatory recall — to correct the problems with the P320.

True to its word, Sig Sauer has now launched a dedicated website for P320 owners explaining how they can get their free upgrade. Owners simply submit their pistol’s serial number and their contact details and Sig Sauer will contact them about how best to send in their pistol for the retrofit; Sig Sauer have confirmed it will even cover all shipping costs. Sig Sauer will then “apply the upgrades, test it, and then return it to you free of charge.”

Additionally, Sig has temporarily suspended all manufacturing and shipment of P320s from its New Hampshire factory while manufacturing changes are implemented. As the Army’s Modular Handgun System was confirmed not to have been affected by the problems, it is unclear if production for the Modular Handgun System contract is continuing in the meantime.

It’s now up to P320 owners to decide if they want to send in their pistols for upgrade. Sig Sauer did advise that turnaround time will be approximately four-to-six weeks, as they anticipate refitting a high volume of pistols in coming months.