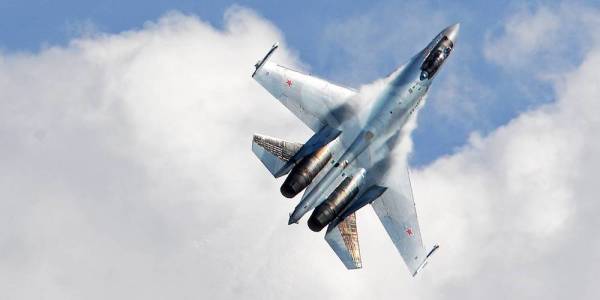 The Russian military’s state-of-the-art Sukhoi Su-35 Flanker-E multi-role fighters aren’t just turning heads and dropping jaws over the wastelands of Syria anymore. During a flight demonstration ahead of Russia’s annual Moscow Air Show, one of the country’s finest fighter jets pulls off a series of amazing aerobatic maneuvers that might make even the most experienced throttle jockey's guts turn.

Kyle Mizokami at Popular Mechanics has a great breakdown of some of the death-defying aerial stunts on display in this ridiculous video, most of which come with particularly alarming Soviet-era titles like Pugachev's Cobra (the nose of the Su-35 is pointed straight up before returning to a level flight path, as seen at 1:56) or the Frolov Chakra (at 3:25, the Su-35 enters a controlled spin through an aggressively tight turn, appearing to simply float through the blue skies above the expo). For Mizokami, the best move comes at 5:25, when the pilot backflips the plane into a twisting, turning dive.

How can this fighter seemingly violate the laws of aerodynamics so casually? Probably because it has a reputation for freakish maneuverability that makes the F-35 Joint Strike Fighter look like an Albatros D-III. The Flanker derivative makes use of three-dimensional thrust vectoring that’s standard on most Sukhoi-produced aircraft (including Russia’s brand new Su-30SM1 fighter) using a quadruplex, digital fly-by-wire control system that allows pilots to pull off astounding feats with precision and poise.

Don’t shit in your little panties just yet. As Tyler Rogoway at the War Zone points out, the aggressive super-maneuverability on display is less important when it comes to actually evading enemy missiles. In the decades since the aerial chases of Top Gun, NATO aircraft have developed “high-off boresight (HOBS) short-range air-to-air missiles and a helmet mounted sight for cueing those missiles towards aerial targets far off the aircraft's centerline,” writes Rogoway, effectively negating the impact of aerial gymnastics.

Still, it’s impressive as all hell — and helps explain why Chinese pilots flying high in their own Sukhoi Su-30 fighter jets have been having so much fun giving American aircraft the Top Gun treatment in recent months.