One of the crappiest things about getting out of the military is knowing that you’ll never experience the thrill of... 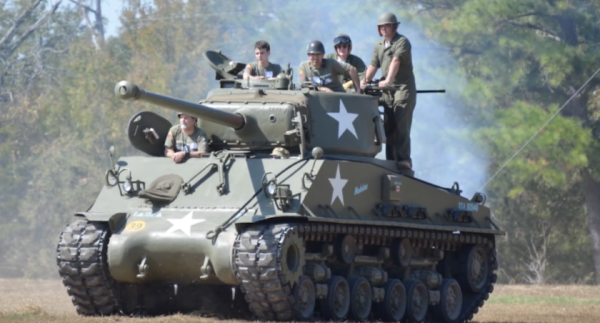 One of the crappiest things about getting out of the military is knowing that you’ll never experience the thrill of rolling into battle again. That is, unless you have a bunch of money lying around, in which case you could be rolling up to your next neighborhood BBQ in a Sherman tank. (It’s not battle, but, hey, there’s potato salad.)

That’s right. For the small price of $550,000, a fully restored World War II Sherman M4A2E8 tank named “Madeline” can be yours. Even better: It’s being sold right here in the United States. On eBay. By a guy in Texas, of course.

Related: Blast drones out of the sky with this street-legal bazooka »

According to the listing, the tank “starts, stops, drives and steers excellent with no issues.” It is also stocked with “every accessory that it was issued with and includes a stack of manuals,” just in case you forgot how to operate a war machine that rolled off the assembly line in 1944. The only catch: It’s not equipped with live guns. But that’s probably a good thing — you know, for the rest of us.

Why on earth would a normal, civilian person need to own a tank? Because tanks are cool. And because, judging from this video of Madeline in action, owning a tank is like a nonstop 4th of July party on wheels. Take a look: