When the war between man and machine comes — and it inevitably will — the battle lines will be clearly... 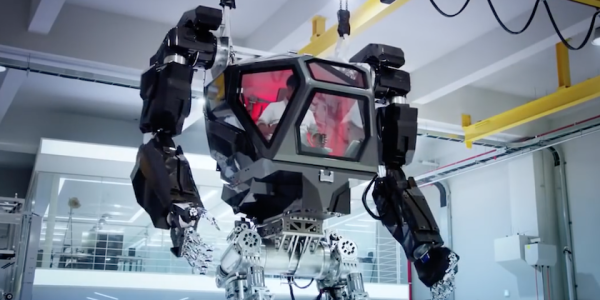 When the war between man and machine comes — and it inevitably will — the battle lines will be clearly drawn: Humans on one side, robots on the other. But what about cyborgs? Where will their loyalties lie? Nobody knows (yet), but keep that very important question in mind as we consider the recent unveiling of Method-2, a massive bipedal robot that is controlled by a person seated inside of its hulking torso like a futuristic baby kangaroo.

In the works since 2014, Method-2 is the product of more than $200 million and the tireless efforts of about 30 engineers employed by South Korean robotics company Hankook Mirae Technology. In an interview with The Telegraph, company chairman Yang Jin-Ho explained that since childhood he had dreamt of building his own robot and “bring to life what only seemed possible in movies and cartoons.” And it appears that his dreams have come true.

Standing 13-feet tall and weighing a whopping 1.5 tons, Method-2 does indeed bear a striking resemblance to military robots in a number of video games (Starcraft) and films, especially the A.M.P. suit in “Avatar,” James Cameron’s 2009 sci-fi epic. Not surprisingly, the designer, Vitaly Bulgarov, has previously worked on several robot-centric Hollywood blockbusters, including “Transformers,” “Robocop,” and “Terminator.”

But Method-2 is not a movie prop. According to The Telegraph, there’s already talk of the robot eventually being deployed to the Demilitarized Zone with North Korea. And Jin-Ho himself acknowledged that it was created with the possibility of field duty in mind, saying, “Our robot is the world’s first manned bipedal robot and is built to work in extreme hazardous areas where humans go.”

Like in “Avatar,” the Method-2 pilot controls the robot’s limbs by simply moving his or her own. That puts quite a bit of power at the pilot’s fingertips. Each arm weighs about 290 pounds. Just imagine getting slapped in the face by one of those behemoths. It’d take your head clean off.

At the moment, however, Method-2 is like a baby — a giant mechanical baby — learning to walk. Still tethered to a power chord and not yet totally comfortable on its feet, the goliath teeters across the floor of the room on the outskirts of Seoul where it’s currently housed, shaking the earth with every step. “Just like humans, it will be able to move more freely in the next couple of years,” Jin-Ho said.

Method-2 is also a prototype of sorts. Hankook Mirae hopes the technology will allow the company to ultimately build robots of all varieties and sizes in the future.

Meanwhile, if you want a Method-2 of your own, you’re in luck. Hankook Mirae says the robots will be available for purchase by the end of 2017. The price: 10 billion won. That’s 8.3 million American dollars. A lot of money. But you can’t put a price tag on being the biggest robotman on the block, especially when the war comes, at which point, of course, you’ll have to choose who you’re fighting for. “Am I man, or machine?” You’ll ask. You’re a man, dammit. Never forget that.