The Navy May Give Up On The Tomahawk Missile, But Not Just Yet

Since the Tomahawk cruise missile made its combat debut in 1991, more than 2,000 missiles have been launched in support... 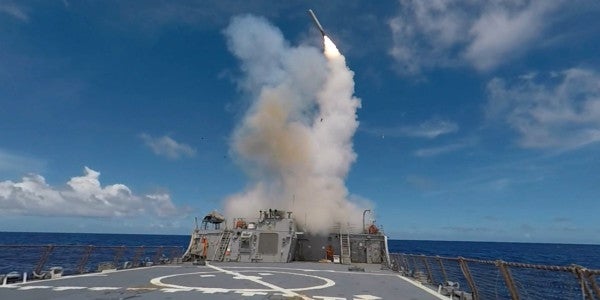 Since the Tomahawk cruise missile made its combat debut in 1991, more than 2,000 missiles have been launched in support of U.S. combat operations,according to Raytheon, the munition’s current producer.

So what is this missile that’s been a stalwart of U.S. military operations more than 25 years? It’s an intermediate-range cruise missile, able to travel 800-1500 nm, that can quickly and accurately carry a 1,000-pound conventional warhead to a target after being fired from a ship or a submarine.

The key to the Tomahawk’s success lies in its ability to project power hundreds of miles away, and avoid putting pilots in danger. On April 6, when the U.S. launched 59 cruise missiles at an airbase controlled by Syrian leader Bashar al Assad, the destroyers that dispatched the missiles were on the other side of the Mediterranean Sea, hundreds of miles away, closer to Europe than to Syria, retired Army Maj. Gen. James “Spider” Markssaid on CNN.

Despite its combat record, the Navy is looking to stop ordering Tomahawks from Raytheon in the coming years, and will ultimately replace them with a next-generation cruise missile.

“This is an old missile, in one sense,” Tom Karako, a senior fellow at the Center for Strategic and International Studies,told Yahoo Finance. “But in another sense, it’s being continually modernized. It’s frequently the thing for which we reach first in these kinds of engagements.”

But what will replace the critical Tomahawk? We don’t know yet.

“[W]e are moving forward with development of what has been referred to as next-generation land-attack weapon,” acting Navy Sec. Sean Stackleytold the House Armed Services Committee in 2014, when he was the Navy’s acquisition chief. “And the key elements of that weapon will be its increased lethality, survivability beyond what Tomahawk brings today.”

In the interim, the Navy is still stocking up on Tomahawks.According to Defense One, the Trump administration has asked Congress for $85 million to buy an additional 96 Tomahawk land attack missiles. That’s on top of the $187 million the Navy asked for to buy 100 new TLAMs last year. But really, how do you put a price on a warhead that chief executives can use to project power at a moment’s notice? In our politically divisive age, that’s something politicians on both sides of the aisle seem to agree on.