Trump Was Right: The Navy’s New Aircraft Catapult Is No Match For ‘Goddamned Steam’

Look, we give President Donald Trump shit for all sorts of reasons: confusion over evening colors, picking fights with the... 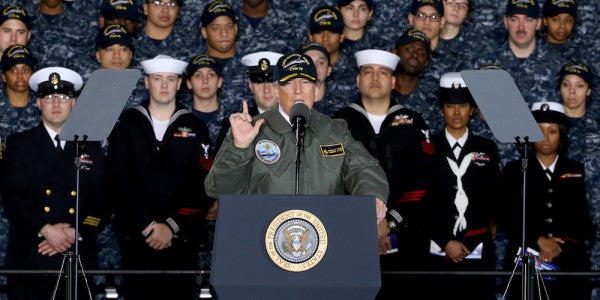 Look, we give President Donald Trump shit for all sorts of reasons: confusion over evening colors, picking fights with the family members of fallen service members, tweeting too much, making service academy graduations about himself, and so on. The purpose of journalism is to challenge the powerful, no matterwho they are, but I’ll be the first to admit when the commander-in-chief is right and the rest of the world is totally wrong.

And in the case of the Navy’s next-generation electromagnetic catapult system, Trump was right: “Goddamned steam” is way better than the futuristic system after all.

Trump first railed against the “digital” Electromagnetic Aircraft Launching System (EMALS) at the heart of the Navy’s new Ford-class supercarrier months ago, in a confusing interview with Time magazine — “What is digital? And it’s very complicated, you have to be Albert Einstein to figure it out,” he said. But now, the new system has some major reliability issues, as extensively documented by the Pentagon’s testing and evaluation arm.

Those issues include: “excessive airframe stress” experienced by Boeing F/A-18F Super Hornet and EA-18G Growler aircraft during launch operations; an inability to electrically isolate the catapult’s complicated power systems in order to conduct maintenance and repairs without halting operations, a critical feature for any vessel underway; and an abysmal “9 percent chance of completing the 4-day surge and a 70 percent chance of completing a day of sustained operations,” according to Pentagon evaluators — sustained operations like the bombing sorties that U.S. personnel downrange have come to rely on in hotspots like Iraq and Syria.

Lawmakers are coming around to Trump’s skepticism. In February, Navy officials urged Secretary of Defense James Mattis to please, for the love of God, don’t shock-test this bad boy just yet — much to the dismay of lawmakers. “Conducting full ship shock trials on CVN-78 will not only improve the design of future carriers,” Senate Armed Services Chairman John McCain — the Arizona Republican and former naval aviator — wrote to Mattis, “but also reduce the costs associated with retrofitting engineering changes.”

Sure, OK, but shock trials won’t necessarily fix the core problem: USS Gerald Ford is absolutely not ready for action downrange because of that goddamn catapult — an especially concerning problem given foreign militaries’ embrace of the next-gen launching and landing tech. As one retired Navy engineer who worked at Naval Air Systems Command Lakehurst during the development of the EMALS, the system is “an engineering nightmare that will haunt the Navy for decades to come.”

Now here it is, your moment of schadenfreude: Commander in Chief Trump presides over the commissioning of the Ford last year. Well played, sir: You were right, even if you didn’t know it just yet.