Which US Military Sword Would You Take Into Battle?

Swords may seem outdated and obsolete, but it wasn’t that long ago that they were still being used in battle.... 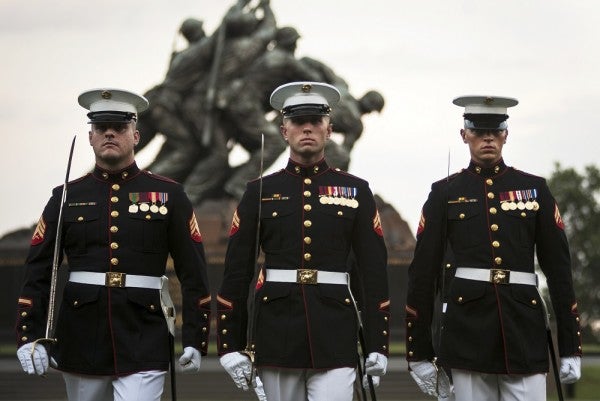 Swords may seem outdated and obsolete, but it wasn’t that long ago that they were still being used in battle. During the American Revolution and through the Civil War, swords remained a common sight on the battlefield. In fact, it wasn’t until after World War I that they stopped being issued to American troops, with the Patton cavalry saber the last sword issued to U.S. military personnel in 1918.

But, what if there was a reason to reach into your closet and pull out that expensive dust-covered paperweight, strap that scabbard on, draw your sword and yell something dramatic like “Hold the line!”

To see how that would play out, what situations military ceremonial swords were originally designed for, and which ones they weren’t, Task & Purpose reached out to Sean Rich, an expert in antique weapons and firearms and the owner of Tortuga Trading. Rich has worked on Disney’s “Pirates of the Caribbean” franchise, and has regularly appeared on the History Channel’s reality TV show “Pawn Stars” as an appraiser of antique weapons, as well as starring in his own series on the National Geographic Channel “Lords of War.”

Rich breaks down the swords still used by the military into three categories: cavalry sabers; infantry swords; and cutlasses. He even entertained a few hypothetical scenarios, like, which sword he’d want to have during the zombie apocalypse?

First, we have the cavalry saber.

They typically have a long curved blade with a robust handguard. Cavalry sabers are durable, heavy, and designed to be used from horseback, where they’re most effective.

“You’re slashing, but you can also just hold it stationary and you’re in a sense just clipping the ground troops,” says Rich. “The momentum of the horse moving forward and the blade striking the target is going to inflict enough damage.”

Not surprisingly, sabers become useless once their length and the user’s mount are out of the picture, like aboard a ship.

“Having a long cavalry saber, you would just be inhibited by the walls of the ship, the rigging, the oppositions weapons coming at you,” says Rich. “It would in a sense just be rendered useless if you didn’t have it positioned perfectly.”

Cutlasses were used aboard naval vessels during boarding actions. Because of the cramped and confined quarters, the swords were short and curved. This also helped keep the blade from becoming entangled in a ship's rigging.

Similar to a saber, the cutlass is designed for a specific space: aboard a ship. Take it out of that space, and you’ll start getting into trouble. According to Rich, the worst place to have a cutlass is on an open battlefield, especially if you were mounted.

The middle ground between the two is the infantry sword.

Lighter than cavalry sabers, longer than cutlasses, infantry swords could be either straight or curved. These swords, called hangers during the American Revolution, were usually worn by officers to signify rank, and functioned as a last-resort weapon.

“If you’ve got a bayonet coming at you, what do you have to defend yourself?” Rich asks rhetorically. “You’ve got your hanger.”

Infantry swords often had robust handguards, some of which were made of a single piece of brass. While the guard offered a measure of protection in battle, it also doubled as an improvised weapon.

“If you were to punch someone in the face with that big guard, you were going to ruin their day,” says Rich.

Rich explained that if you had three fighters in a gladiatorial arena, each one with a different type of U.S. military sword, there’d be one clear winner.

The guy with the infantry sword is walking out alive, says Rich, who explains that it gives the user greater reach than the cutlass, and unlike the cavalry saber, it’s lighter and is designed to be used on foot, so it going to let the fighter outmaneuver someone with the heavier and slower cavalry sword.

“In an arena situation, you want something that was the most nimble,” explains Rich. “Especially when I would be confronted by all those types of swords, so I’d stick with that same straight blade with a decent handguard.”

Ok, so we know sabers are great on horseback, cutlasses are for ships, and infantry swords are for last stands or whirling melees. But, what if you’re in a really hairy scenario, like in the middle of of the Zombie apocalypse?

If you’re going to kill zombies, bring a cutlass.

“It’s got a full guard, it’s a cup hilt so it protects your entire hand, with no openings for anything to get through, and it’s got a medium weight curved blade and it’s the perfect size, not too long, not too short, and will definitely get the job done,” says Rich, who clarified that in this case, the job is decapitating zombies.

Additionally, cutlasses will help you out if you ever find yourself marooned on a tropical island with abnormally large animals. Think Skull Island from “King Kong.”

“You have to protect your body as much as possible,” says Rich, adding that he would opt for the same cutlass he chose for the zombies, and for similar reasons.

“If I was marooned, you could have the biggest animals out there, but if you get the simplest of injuries, you can die from infection so I would want something that was going to protect my hand because that would be my most vulnerable if I was going to be fighting or fighting and protecting myself,” explains Rich. “That Navy cutlass gives the most effective range for the size of the weapon.”