The Navy May Skip A Crucial Test To Rush The USS Gerald R. Ford Into Service

With the $13 billion dollar next-generation USS Gerald R. Ford aircraft carrier behind schedule and over budget and it's other 10 aircraft... 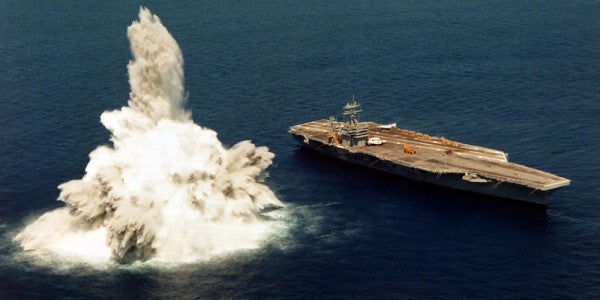 Each new type of Navy ship undergoes full-ship shock trials, where the branch detonates large explosives near the ship to make sure it can take the strain, though the first ship in every class doesn't always undergo such testing.

In the case of the Ford, the House Armed Services Committee's Seapower and Projection Forces Subcommittee is letting the Navy off the hook for shock testing, according to Defense News.

The Navy could still chose to do the shock trials on Ford if it wanted, according to House aides familiar with the matter. The plan to have the Navy perform FSSTs for Ford was pushed by Michael Gilmore, the former director of the office of test and evaluation, and supported by Senate Armed Services Committee Chairman Sen. John McCain, R-Ariz.

If enacted, it would be welcome news to fleet schedule planners who opposed the move because it would delay Ford’s first deployment. The fleet has been strained under the weight of unrelenting requirements for its forces and budget cuts that have eaten away at readiness and created backlogs in the shipyards.

As a result, the Navy could actually deploy the Ford as early as 2020, close to the launch date it had originally hoped for. It would also give the Navy more time to work out kinks in the new aircraft launching and recovering systems that have dogged engineers and caused massive cost overruns.

“Once the Ford comes online you can have the East Coast carriers essentially cover the Middle East with short gaps and have the West Coast carriers fill the gaps in the Pacific while Reagan is in its spring maintenance availability,” Bryan Clark, an analyst at the Center for Strategic and Budgetary Assessments told Defense News.