Six days after being commissioned, the USS Gerald R. Ford, the Navy's newest and most sophisticated aircraft carrier, received and … Continued 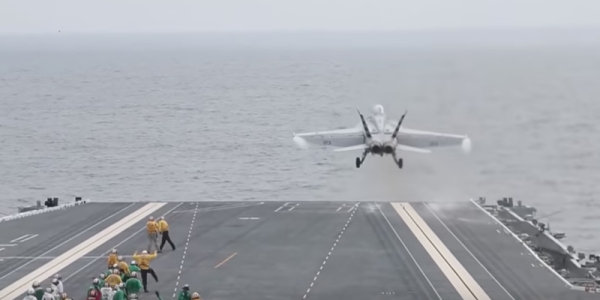 Six days after being commissioned, the USS Gerald R. Ford, the Navy's newest and most sophisticated aircraft carrier, received and launched its first fixed-wing aircraft.

An F/A-18 Super Hornet landed on the ship at 3:10 p.m. on July 28, catching the number two arresting wire of the Ford's Advanced Arresting Gear system and took off at 4:37 p.m., launched from catapult one of the Ford's Electromagnetic Launch System.

“Today, USS Gerald R. Ford made history with the successful landing and launching of aircraft from VX 23 using the AAG and EMALS,” Adm. Phil Davidson, commander of U.S. Fleet Forces, said, referring to Air Test and Evaluation Squadron 23. “Great work by the Ford team and all the engineers who have worked hard to get the ship ready for this milestone.”

The tests on July 28 appear to show the AAG and EMALS have overcome issues that cropped up during their development — issues with the EMALS prompted President Donald Trump to admonish the Navy to return to steam-powered catapults earlier this year.

The July 28 tests were the Ford's first shipboard recovery and launch of fixed-wing aircraft, Ford commanding officer Capt. Rick McCormack said. By the end of the day, the Ford had completed four arrested landings and catapult launches:

The Advanced Arresting Gear is a software-controlled system that the Navy says will offer greater reliability and more safety and interoperability with more aircraft. It also has built-in testing and diagnostic features, meant to reduce maintenance and lower manpower needs.

Those systems are two of 23 new or modified technologies installed on the Ford, which is the first Ford-class carrier. Two more in-class carriers are planned, the USS John F. Kennedy and the USS Enterprise.