It wasn’t long ago that the V-22 Osprey program seemed to be mired by constant criticized. A 2012 reportin Wired’s... 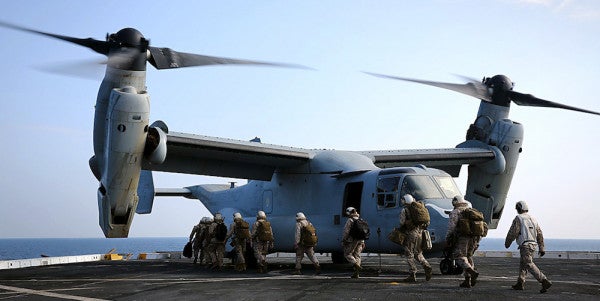 It wasn’t long ago that the V-22 Osprey program seemed to be mired by constant criticized. A 2012 reportin Wired’s Danger Room by David Axe called it “an aircraft with a reputation for falling from the sky.”

That report detailed a series of mishaps that caused injury and millions of dollars in damage, as well as the fraught development of the V-22, a tilt-rotor aircraft that can land and takeoff like a helicopter, and then fly forward like a propeller-driven airplane.

“Between 1991 and 2000, four V-22s were destroyed during test flights. Thirty people died as a result, turning the Osprey from the Pentagon’s most revolutionary warplane into the most controversial aircraft in the Defense Department arsenal,” Axe writes.

Now, half a decade after Axe’s story, the Osprey is an important asset used aggressively and successfully by three branches of the U.S. military: the Marines, the Navy, and the Air Force. The Army is now considering adopting the Osprey for medical evacuations, according toa recent piece by Loren Thompson in Forbes.

In fact, Thompson’s calling the V-22 the most successful combat system produced since 9/11. “This is remarkable progress for a program that was so controversial when it first began flying that Secretary of Defense Dick Cheney tried to kill it every year he held the job,” Thompson writes.

A V-22 Osprey carried Osama bin Laden to his final resting place, landing on the USS Carl Vinson for the al Qaeda leader’s ocean grave in May 2011.

Earlier that same year, another V-22 Osprey was instrumental in rescuing an F-15E Strike Eagle pilot who ejected over Libyan soil.

“Since it became operational with the Marines in 2007 and the Air Force in 2009, V-22 has proven its value and versatility over and over again, in Afghanistan, in Iraq, in Kuwait, and across much of North Africa,” Thompson writes.

Very few airframes have ever been adopted by all four branches of the military. If the V-22 joins its ranks, its status will be cemented as one of the defining and most revolutionary military technologies of the post 9/11 era.