A video recently uploaded to YouTube includes rare footage of U.S. F-22 Raptors refueling during an anti-ISIS operation over the … Continued 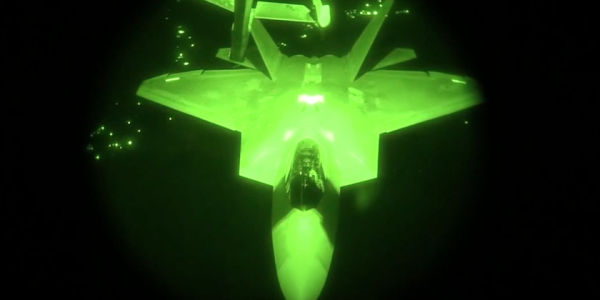 A video recently uploaded to YouTube includes rare footage of U.S. F-22 Raptors refueling during an anti-ISIS operation over the Middle East.According to the Aviationist, the footage was captured from a KC-10 Extender tanker assigned to the 908th Expeditionary Air Refueling Squadron. The Aviationist also reports that the video, part of which was filmed through a night vision device, shows the most up-to-date Raptors in action. But what makes the video exceptionally cool, in my opinion, is the clear view of the cockpits it offers. The American flag draped inside the second jet is a nice touch.

The Raptors appearing in the video apparently belong to the 90th Fighter Squadron from Joint Base Elmendorf-Richardson, Alaska, which deployed to the Middle East as part of Combined Joint Task Force Operation Inherent Resolve in April. Although Raptors have played a key role in the anti-ISIS campaign since 2014, these are the first F-22s involved in the fight that are capable of dropping eight GBU-39s — an upgrade from their previous payload of two 1,000-lb GBU-32 JDAMs. The upgrade, which also included an improved radar system and other modifications, enhances the Raptor’s ability to carry out precision airstrikes.