Forget the Swiss Army Knife: When it came to committing espionage and sabotage against the forces of evil during World... 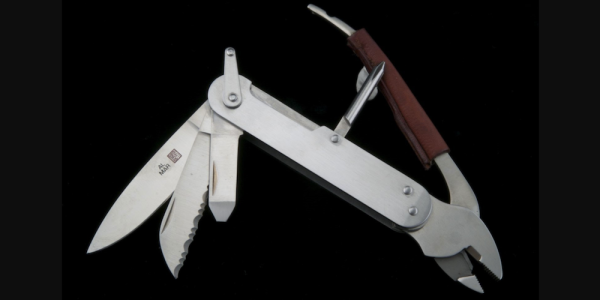 Forget the Swiss Army Knife: When it came to committing espionage and sabotage against the forces of evil during World War II, no tool was more favored among American and British spies than the simple-yet-effective “escape and evasion knife.”

Issued to members of the United Kingdom’s Special Operations Executive and Office of Strategic Services during the height of the global war, this classic pocketknife was based on the classic Victorian design manufactured by the renowned Joseph Rodgers & Sons with a few functional additions for, well, escaping and evading the enemy.

Photo via The Saleroom

The nasty little multitool comes equipped a drop-point blade, a wire cutter, three hacksaw blades, a tin opener, and a screwdriver; everything a talented spy needs to avoid capture by the enemy.

Photo via The Saleroom

No, it doesn’t have the hidden gadgets that you might expect from, say, James Bond or Simon Templar, but anyone with even the mildest fascination with the history of war knows that a master spy’s most important tools are his wit and guile — although a tool like this certainly doesn’t hurt.

Fairly rare and much sought-after by collectors, this multitool is available at auction on Saturday, April 1, starting at the relatively low price of $3776.