The Air Force’s Secret Space Plane Is Headed Back Into Orbit. Here’s What It’s Probably Up To

The Air Force’s top secret unmanned X-37B space plane blasted off on its fifth flight on Sept. 7, launching from... 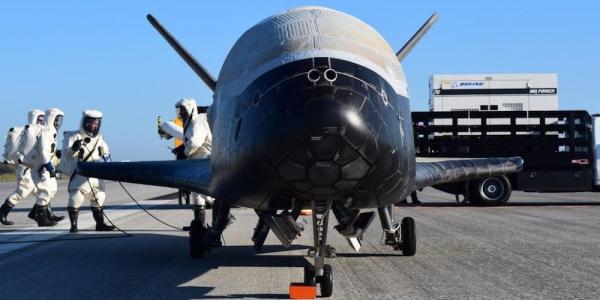 Though the X-37B Orbital Test Vehicle’s mission is classified, CBS News reported that the spacecraft “was believed to be bound for a relatively low orbit” using the Falcon orbital launch vehicle’s second stage. The first stage, designed for recovery and reuse, returned to its Florida launch pad minutes after launch in SpaceX’s 16th successful Falcon return, per CBS News.

The X-37B, first launched in April 2010 after 11 years in development, finally landed back in Florida in May after 718 days in orbit, landing at Kennedy Space Center with a sonic boom after completing its fourth mission in space.

While the Air Force said at the time that the spacecraft “performs risk reduction, experimentation, and concept of operations development for reusable space vehicle technologies,” the details of that mission remained classified as well. According to Popular Mechanics, experts believe that the X-37B mission payloads “are used to test new military space satellite technologies including ion thrusters, and optical and radar-based sensors designed to spy on objects on the ground or other satellites.”

The involvement of SpaceX is no surprise, announced by Air Force Secretary Heather Wilson during a Senate Armed Services Committee hearing in June. The branch has publicly asserted that one of the X-37B program’s main goals is to test “reusable spacecraft technologies” (hence the July solicitation of a five-launch contract from SpaceX and United Launch Alliance, the latter of which is still listed as the craft’s launch vehicle), an ideal operational fit for Musk’s burgeoning aerospace venture.

“I would be comfortable with flying with a reused booster,” Air Force Space Command Gen. John Raymond publically said back April of potentially using refurbished SpaceX launch vehicles. “They’ve proven they can do it. It’s going to get us to lower cost; it’s going to get us to being able to get satellites in orbit. That’s why they bring the boosters back. I think we’d be hard-pressed to say we’re not going to do it. We would embrace that.”

The X-37B Orbital Test Vehicle (OTV-5) is being staged in preparation for its upcoming launch on September 7, 2017.Photo via Boeing/DoD

But the pivot to the Falcon 9 seems to tip the X-37B program’s hand just a bit low-cost Falcon 9 is also explicitly designed for the rapid delivery of satellite payloads to low earth orbit and geosynchronous transfer orbit, a function that has earned the SpaceX two contracts for GPS satellite insertions since it was certified to launch military payloads in 2015 and a National Reconnaissance Office spy satellite this past May.

And according to experts, that low altitude is the ideal venue to test out an exotic thruster system that may change the game for orbital reconnaissance. “I think the clue is how low an orbit is in,” SecureWorld Foundation technical adviser Brian Weeden told Air & Space Magazine in 2016, citing the space plane’s relatively low altitude of 200 miles as an indication that the Air Force is testing the X-37B’s experimental ion thrusters.

These “Hall-effect” ion thrusters, similar to the NASA Evolutionary Xenon Thruster (NASA) that use noble gases to create thrust, are designed to give spy satellites — which, at lower orbits, are forced to frequently fire maneuvering thrusters to maintain altitude — flexibility without the extra weight of liquid fuel, Weeden said. “One of the reasons that the traditional exquisite imaging satellites are so hard to launch is because they’re big and they’re heavy.”

It’s unclear whether SpaceX will continue to play a role in the Air Force’s space operations; as Wilson said back in June, competition between the company and ULA “is reducing the cost of launch services,” a major priority for both the DoD and NASA amid Washington’s perpetual budget anxiety. But so long as the X-37B continues to put eyes in the sky for the U.S. intelligence community, it seems likely that Musk’s SpaceX will be along for the ride.