We may earn revenue from the products available on this page and participate in affiliate programs.In 2015, The New York... 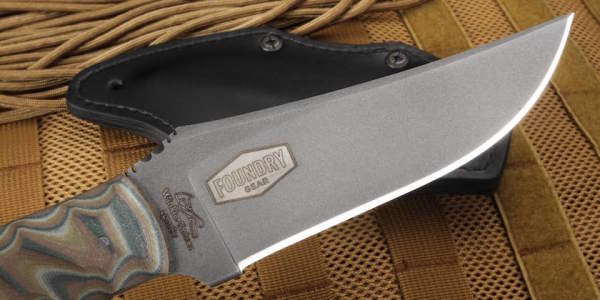 In 2015, The New York Times published an exhaustive“secret history” of SEAL Team 6. Included among its many revelations was the detail that, for a period of time, guys who lasted a year with the team’s Red Squadron were given a tomahawk forged by a North Carolina-based knife maker named Daniel Winkler. Some SEALs carried the hatchets on missions, and “at least one killed an enemy fighter with the weapon.” Winkler, the Times noted, also happens to be the guy who made the tomahawks for the film “The Last of the Mohicans.”

But Winkler doesn’t just make blades for Tier 1 operators and Daniel Day-Lewis. “Been there and back” is the slogan forWinkler Knives II, a line of made-to-order tactical blades that Winkler developed with input from the special operations units he’s worked with since the mid-2000s. Lightweight and balanced, with full-blade bevels and handles that fit naturally in the palm, Winkler’s knives, like his tomahawks, are designed for people who intend to use them — whether that’s on an elk hunt in Alaska or a raid in Raqqa.

They are not cheap. The most basicWinkler Belt Knife (with sheath) is priced at $350 and weighs between seven and eight ounces, depending on the handle material. The price and weight go up with additional modifications. Arkansas-based boutique KnifeArt.com offers several badass exclusive editions of the belt knife as part of itsFoundry Gear series — which features high-end variations of knives made by some the world’s most renowned bladesmiths — including one with a sculpted multi-cam G-10 handle that Task & Purpose got to take for a spin.

The Winkler Belt Knife in Sculpted Multi-Cam G10 weighs in at 8.9 ounces with a 4.5 inch CPM 3V steel blade and a total length of nine inches. It’s a meaty knife, but all of Winkler’s blades are designed, as he once told me, so “guys actually carry them in the field.” The formed Kydex sheath was also crafted with input from special operators. Even with the extra weight from the G10 handle, the whole package is remarkably light, especially for how sturdy it is. 3V is a super tough alloy that supports a very thin edge. Nothing is going to throw this blade off course.

The damage? $430. It’s an investment. But if you care for a Winkler knife properly, it should last a long time. Winkler says on his website that his “goal is to make tools of uncompromising quality that will a last lifetime and survive as heirlooms for future generations.” Which means that, in theory, a soldier deployed to Iraq or Afghanistan could march into battle with the exact same Winkler knife that his grandfather or great-grandfather carried into battle in Iraq or Afghanistan decades before him. In that case, it’d totally be worth the money.