Does the Omnivore eat everything? 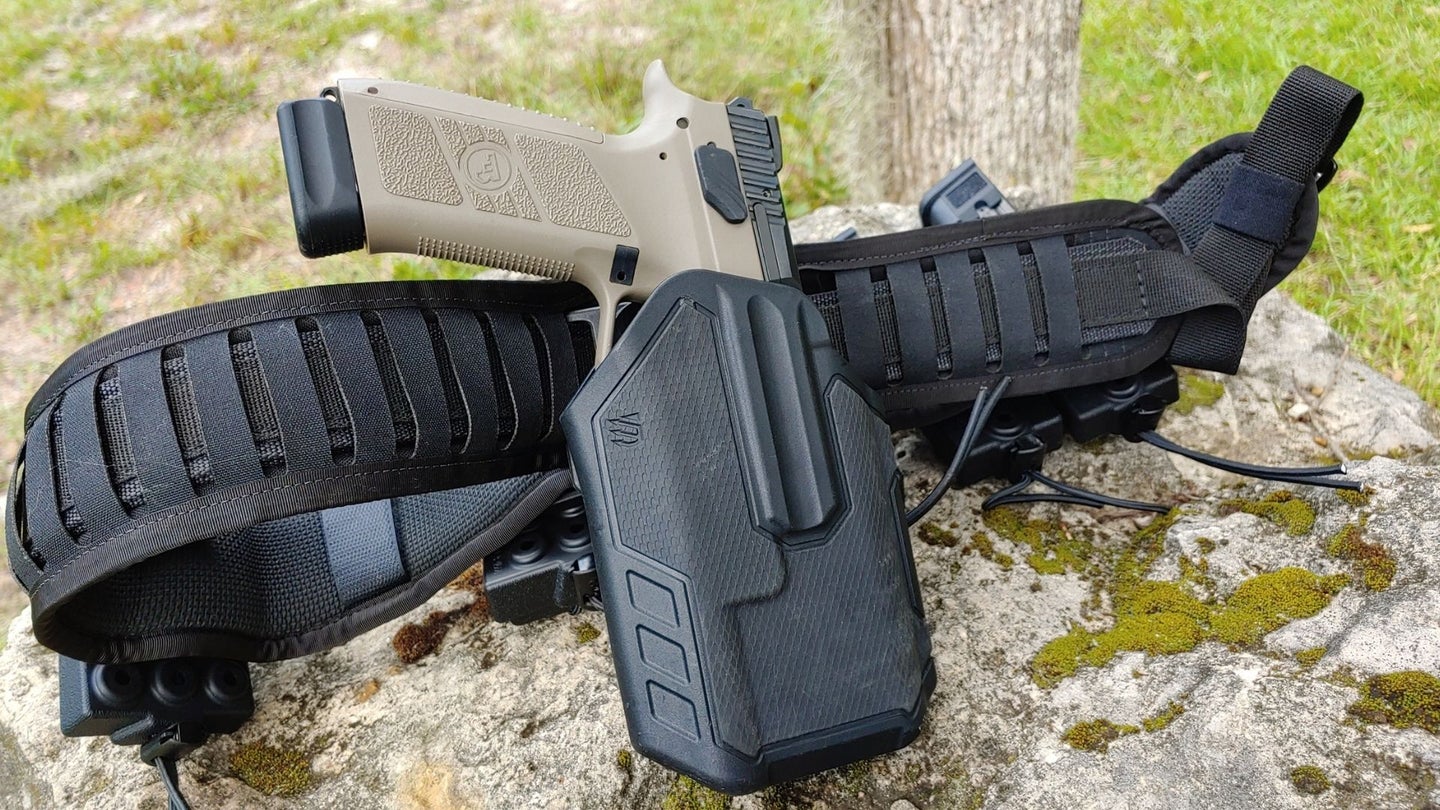 I like when I’m wrong. Being wrong means I’m pleasantly surprised, and that’s always nice. One mantra I used to repeat ad nauseum was that universal holsters suck. Oftentimes they do, especially when made from soft nylon and designed to be baggy to fit whatever you shove into it. These crappy, loose-fitting holsters are downright dangerous and a quick way to ensure I’ve judged you harshly. Nowadays, when I say universal holsters suck, I have to add an addendum, like except for the Phalanx Defense model, the Phlster Floodlight, and maybe the Blackhawk Omnivore. Today, I intend to find out if the Omnivore from Blackhawk can join my list of exceptions as an exceptional universal holster. Well, quasi-universal.

Like the Phalanx Defense and the Phlster Floodlight, the Blackhawk Omnivore doesn’t fit everything that goes rooty tooty. In fact, it’s built for automatic handguns with Picatinny accessory rails in the full-sized to compact categories. Your Glock 19s, your 1911s, etc., will work without issue. No pocket pistols, no wheel guns, and no antiques without Picatinny rails. What caused me some slight anxiety was the price point. In the gun world, ‘you get what you pay for’ is most certainly true. As such, the sub-$50 price point had me concerned. That’s quite cheap for a level 2 retention, light-bearing holster.

Sitting inside a big box of sea animal-killing plastic sits your Blackhawk Omnivore. Included with the holster are a paddle or belt loop attachment, a thumb extension, and instructions on how to set the whole thing up. The Omnivore is big and blocky with a chunky design. It’s most certainly not for concealed carry. It’s seven inches long from the thumb lever to the bottom of the holster, 5 inches wide, and two inches thick when measured from the two furthest points. It’s made from a modern polymer design with no detectable flex in the design. It’s rigid and very much like a duty holster.

The Omnivore comes in three different models. There are two light-bearing models and a standard model. The light-bearing models vary between a model compatible with the Streamlight TLR-1 / TLR-2 and the Surefire X300U series of lights. The third model is not light-bearing, and instead provides a little brick that attaches to a Picatinny rail which interacts with the Omnivore’s retention system.

Speaking of the retention, we have a level 2 device that’s defeated by a thumb-driven lever. The idea is simple and allows the thumb to disable the retention device as you draw your weapon naturally. Blackhawk includes a longer thumb release to accommodate hand and gun sizes. This extends the length of the device and makes it easier to engage with.

Blackhawk’s previous and deeply flawed Serpa series left behind a ton of attachments for various uses. As such, the user can easily attach the Omnivore to various platforms. This includes thigh rigs, MOLLE mounts, and many others.

How we tested the Blackhawk Omnivore holster

I have a Wilder Tactical battle belt, and it seemed to be the perfect platform to mount the Omnivore, too. I attached the holster easily enough and then set forth in testing a variety of handguns with the Streamlight TLR-1 mounted to it. Glocks, an XD, an S&W M&P, an FN FNS, a Beretta M9A3, a Walther P99, and a railed 1911, all fit without issue. My CZ P09 fit, but it was a tight fit to be clear. Other than the P09, everything fit with ease.

There are a few factors that are paramount to good holster selection. First is safety. Is the trigger completely covered? Will anything collapse on the reholster? With the Omnivore’s modern polymer design collapsing isn’t an issue and the holster is full enclosed. Next, I test my access to the gun.

As always, I started with dry fire. I did simple draws that were relatively slow and mild as I became accustomed to unlocking the retention device and drawing the weapon. I did so over and over until I felt comfortable getting the gun into action somewhat rapidly. With my large hands, I didn’t see the need for the extended thumb lever. I could press the retention device without issue and the thumb-driven retention requires only a firm press. It’s not difficult to defeat by any means.

From dry fire, I moved to live fire because live fire is so much more fun than dry fire. Again, I started a little slower for safety’s sake and ensured I was properly prepared to draw my pistol and engage safely. Unlike the SERPA series, the thumb drive cannot lead to an accidental discharge. Even so, it’s wise to jog before you sprint.

Once the draw became mechanical, I added speed and found a few flaws. If I went a little too fast, the gun would fail to draw. I couldn’t diagnose if it was me or the holster at the range, so I slowed the accelerator a hair as I pressed the button and drew the weapon.

Next, I began practicing drawing from a multitude of weird angles. Only optimists plan to draw with their dominant hand from the standing position. I sat down, kneeled, laid on my back and on my stomach, and practiced drawing in each position. Sitting was the only issue, and that was only an issue with armrests. With the off-hand, I did a Dragoon-style draw that is a little difficult but entirely possible. The big fear was my ability to access the retention device at a multitude of angles. Yet, it proved big and broad enough to be easy to access in whatever contortionist-like position I found myself in.

Finally, I utilized an empty gun and tried to pry, pivot, and make the retention device fail. I tugged, yanked, and shook the thing, and it never failed. The gun remained holstered. I then drug the holster across the ground facedown. I drug it through my driveway which offered it plenty of exposure to sand, rocks and other fun stuff.

This was the final access test and I wanted to see if common debris could render the device incapable of being pressed and trapping the firearm. After several drags, and the gleeful help of a 3-year old with handfuls of sand the Omnivore accepted and released my firearm. Admittedly the action is a little gritty and I’ll need to PM the holster to prevent future issues.

First and foremost, the Omnivore is completely safe. The handling doesn’t encourage unsafe retention devices, and the trigger is completely covered. The holster doesn’t collapse like nylon or cheap leather, either. Safety is the first and most important part of a holster.

Access is almost perfect. I ran into a little issue I’ll explain below. However, I could access the gun in multiple positions and with my off-hand without much difficulty. A little training and practice would smooth out the edges for sure.

Who doesn’t love one device that can do a multitude of functions? The Omnivore can carry almost every gun I have without issue. Sure, it won’t work with six guns or pocket pistols, but that’s fine with me. It holds those guns without issue and keeps things secure and locked in place. The retention does as advertised and provides consistent retention against most external forces.

The ability to interface with already established mount platforms is quite nice. I prefer the belt loop model, but being able to attach the holster to various points is nice. On top of that, the Omnivore works with modern handgun accouterments. The Omnivore accommodates red dot sights and most compensators.

If you are the handy type, you can also modify the Omnivore to work with the Safariland QLS systems for mounting even more holster mounts. This isn’t a factory option but should be noted.

Finally, who doesn’t love a holster that functions with a variety of handguns, a variety of modern accessories, as well as established platforms at a great price point? For less than $50, the Omnivore is a very affordable holster option. I also think it’s great that the Ghosts in Ghost Recon Breakpoint use the Omnivore on their character models. It just makes me smile.

What we don’t like about the Blackhawk Omnivore holster

Remember the issue we had at the range? Well, I couldn’t diagnose it at the range, but once I got indoors, I could experiment a bit more and I figured out the issue pretty quickly. As you push down on the button with your thumb, your hand will be naturally pressed upwards in the opposite direction. This natural upward motion will slightly begin the draw of your firearm.

This is where the pistol snags when drawn. If the upper motion begins before the button is fully depressed, the gun will not draw, and you’re stuck pulling at the gun and pushing at the button, and nothing will happen. To remedy the situation, you have to press the gun down and then draw again. There is no slack that allows the gun to be drawn when even a slight upward draw begins.

With a slow, consistent draw, this isn’t an issue. When you start adding speed, you increase your chance of not doing it just perfectly. Let’s be perfectly clear: This only happened once in hundreds of draws. It’s not a huge problem, but it must be mentioned and explained.

With most guns, this isn’t a problem. With bigger guns or small hands, the length has increased, and this makes it even harder to push the button perfectly.

The Blackhawk Omnivore is a great little holster, especially when you consider the price point. I think it’s one of the best budget holsters on the market. The real downside is that it’s almost like a holster without a home. It’s not appropriate for duty and too big for concealed carry. It’s a great little holster for hunting or hiking, but it’s tough to find a dedicated use beyond that and casual range use.

FAQs about the Blackhawk Omnivore holster

Q: How much does the Blackhawk Omnivore holster cost?

A: Well, that’s tough to say. I’d go to Blackhawk’s website for a complete list of compatible firearms.

Q: Will this holster work with Olight, Modlite, or whoever else makes a handgun light?